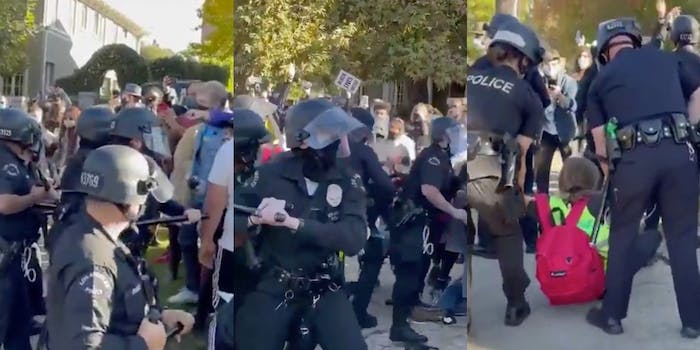 The video shows one officer swinging away.

Following nearly two weeks of protests outside Los Angeles Mayor Eric Garcetti’s home, a new video, trending on Reddit, shows at least one officer in riot gear swinging away at people with a baton outside the Getty House, the official residence of the mayor.

According to KTLA, “the officers were ‘in crowd management mode’ when they saw someone using a bullhorn in violation of a municipal code and attempted to make an arrest,” according to Los Angeles Police Department spokeswoman Melissa Podany.

The crowd “moved in on officers, punching, pushing and kicking at officers,” Podany told KTLA.

However, BLM LA cofounder Melina Abdullah says the officers advanced on the crowd “without cause.”

“They basically ambushed us, and swung their batons,” Abdullah told KTLA.

KTLA learned, from Abdullah, that the group was told they would be OK if they maintained their protest across the street. However, a video shows a group of LAPD officers loading up in riot gear. The officers walk up to the protests, surrounding one protester. But the situation quickly turned into a melee, with officers beating protesters, according to the subsequent video.

According to Podany, the officers ended up declaring an unlawful assembly. The Los Angeles Times reported the police arrested Jamie Penn, the Sub-District 3 representative for the Wilshire Center Koreatown Neighborhood Council. She was released later that day.

“There is no acceptable justification for LAPD to use force against Angelenos who are peacefully exercising their right to free speech,” Raman said on Twitter.

Assemblywoman Wendy Carrillo (D-Los Angeles) tweeted about the incident, declaring that the “right to peacefully protest is a First Amendment Right that is sacred.”

“I urge LAPD to restrain from use of force, practice de-escalation tactics, and ultimately, protect the public,” Carrillo stated. “Peaceful protests should not lead to police in riot gear making arrests amid COVID-19.”