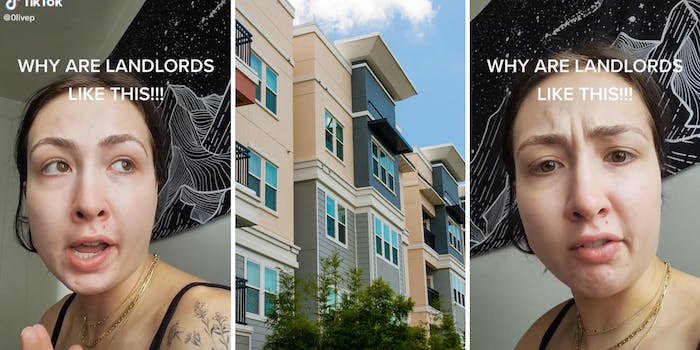 ‘A plain old scam’: College student says landlord is charging her for pre-existing ‘structural damage’ in the 100-year-old building

'If she's not giving you your deposit back, don't clean.'

An Illinois college student says that her landlord is holding the security deposit over her head by making “ridiculous cleaning requests” and threatening to charge her for pre-existing structural damage in the “125-year-old apartment” in a now-viral TikTok, sparking debate in the comments.

In the video posted by TikToker Olive (@0livep) on May 16, she explains that her landlord left her and her roommate a note detailing cleaning requests such as deep cleaning under the kitchen appliances, hiring a carpet cleaning crew, painting, and cleaning discolored, chipped-off caulk in the shower. Text overlay reads, “Why are landlords like this!!!”

@0livep Pulling this out from the drafts, we have our move out inspection at the end of May so stay tuned for the drama #landlordspecial #rent #securitydeposit ♬ original sound – 🫒

“To all the landlords out there, I just want to know why you insist on scamming people out of their security deposits because you don’t know how to maintain your own fucking property,” Olive says in the clip. “She says that if we don’t get this yellow stuff out [of the shower], she’s going to charge us.”

Olive then shows cracked window paneling in the bathroom, saying, “This is how she is leaving her property. Tell me why I should be charged for that not being fixed.”

The caption reads, “Pulling this out from the drafts, we have our move-out inspection at the end of May so stay tuned for the drama.”

The video has amassed over 265,000 views as of Monday, with commenters urging her to push back against the cleaning demands.

“Landlord here. Naw you’re being taken for a ride. Don’t do a damn thing. Get a small claims lawyer to review everything. File a lawsuit. Easy Win,” one user said.

“Apartments NEVER require that much cleaning when moving out. And you don’t have to unless it’s in your lease in fine print,” another wrote.

“If she’s not giving you your deposit back, don’t clean,” a third suggested.

In a follow-up video, Olive explains that her landlord is a family friend, and their relationship had been good while she was a tenant, which has made the new demands more confusing.

@0livep A little more context for ya.. why would we need to clean something thats going to be torn down a week later? Oh right, to steal our money.. #landlordspecial #slumlord #apartment ♬ original sound – 🫒

“She even texted my roommate and I a month ago saying, ‘Thank you for being such great tenants. You guys have been amazing,'” Olive says. “And then all of a sudden, in the month leading to us moving out, her whole persona changed.”

Olive continues that while the other requests are just “petty,” the bathroom is the main issue, as her landlord is planning to renovate it.

“This whole drama with the mold in the tiles started because she brought a contractor in because she’s planning to gut the entire bathroom,” Olive says. “So tell me why she’s dangling our security deposits over our head for not being able to get stains out from between the tiles. That’s a plain old scam.”

However, Olive shares that her landlord called her in a final update video. They negotiated the cleaning demands, explaining that rental law in Illinois states that it is the “landlord’s responsibility to pay for carpet cleaning in between tenants.”

“On the phone, she asked me what I thought were ridiculous cleaning requests, and I just said there was more damage done to the tiles when we tried to get the stains out, and we were concerned that she was going to charge us,” Olive says. “She said she would never charge someone for structural damage.”

@0livep Good news!!! Finally spoke to my landlord and it looks like we will get our money back after all #slumlord #landlordspecial #apartment #securitydeposit ♬ original sound – 🫒

Olive says the landlord also assured her that both she and her roommate would receive their security deposit “as long as [they] made an effort to clean before [they] move out.”

“It looks like my roommate and I will be getting our money back after all,” Olive says. “Even though a lot of the cleaning requests are usually done by landlords, at the end of the day, I’m a softie, and I have a big heart, so I’m going to do it anyways.”

The Daily Dot reached out to Olive via TikTok comment.