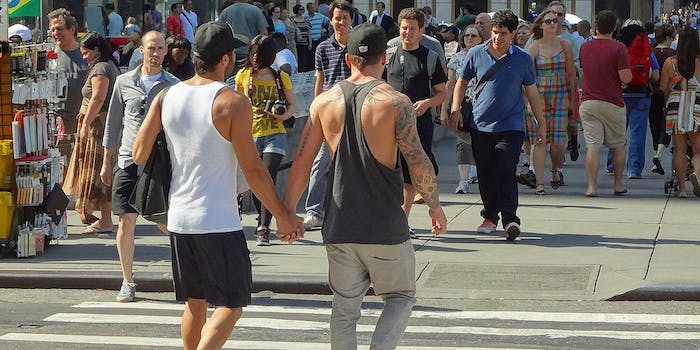 Gay student petitions to bring a date to homecoming, gets sent home from school

Lance Anderson said that his school retaliated after his petition received national attention.

Lance Sanderson reported for class at Christian Brothers High School in Memphis, Tennessee, on Monday morning, just like he’s done for the past four years.

But Sanderson, who is gay, was told to go home, he said in a tweet later that afternoon.

It seems that administrators didn’t want the high-school senior present because of a a petition he wrote that received almost 25,000 signatures, national news attention, and celebrity supporters who spoke out on Sanderson’s behalf.Saturday was the homecoming dance at CBHS, and Sanderson wanted to bring a date, just like all his friends planned to do. But Sanderson’s date is male, and the school wouldn’t allow same-sex dates.

In his petition, Sanderson wrote:

I’ve been out since my freshman year of high school, and I’ve been a great student as well as a photographer for most of my school’s events. When I first started to float the idea of bringing a same-sex date to homecoming, I was told that my school doesn’t discriminate by a school official.
But when that school official left over the summer, I was met with harsh opposition by my school. One administrator told me that even though some people interpreted Pope Francis’s teachings on the issue as meaning they should support same-sex couples, these people are, “not the authority to which Christian Brothers High School is accountable.” And now my school is making daily announcements across the whole school, saying that students can’t bring same-sex dates from other schools.

Sanderson’s petition spread quickly, and he gave interviews to a slew of reporters. But CBHS administrators refused to change their opposite-sex-only date policy. So Sanderson skipped homecoming in protest.

Sanderson was sitting in class on Monday when a school administrator called him into an office.

“He started talking about [how] the press was bad for the school and it was a hit for the brothers,” Sanderson told WREG. “They said they had 890 other kids to worry about, and they didn’t want to deal with this right now, and I could do work from home and they’re not going to mark my attendance, but they didn’t want me there.”

Last week, the school sent out a letter in response to Sanderson’s petition as it gained more and more stream. In the letter, the school said that boys from other schools have never been allowed to attend CBHS dances. The school also said that it was already actively working to create a more inclusive environment for LGBT students and had installed a gay Catholic alumnus to advise the student committee of the school board.

“We imagine our boys are uncomfortable being the center of attention and being exposed to the ‘screaming’ in social media,” read the CBHS letter. “Twitter and Facebook are great outlets to express opinion but not discussion. We ask for your patience and understanding and know that important topics such as this are not taken lightly. “