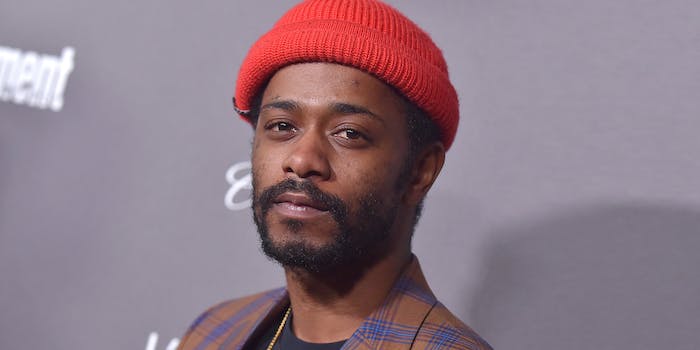 'I’m ok everyone! I appreciate everyone checking in on me but I’m good.'

LaKeith Stanfield took to Instagram on Tuesday morning to assure fans he was OK after posting a series of alarming videos on the app.

The Get Out and Sorry to Bother You star shared a since-deleted video in which he appeared to pour vodka into a pill bottle with a label for carvedilol, which is used to treat high blood pressure and heart failure.

“I like to be by myself because I can hurt myself and no one tells me to stop or fakes like they care,” he captioned the post.

A second now-deleted video zoomed in on the pill bottle, whose label included Stanfield’s name, and the vodka spilling into it in slow motion, with the caption, “Reality is boring and moves too slow and no one is trustworthy.”

“Lakeith” rushed to the top of Twitter’s U.S. trends in the early hours of Tuesday morning, as Stanfield’s posts prompted an outpouring of concern from fans and other celebrities, including comedian Patton Oswalt.

“I have no way to contact Lakeith Stanfield directly,” Oswalt wrote in a since-deleted tweet. “I’ve reached out to some friends we have in common. But can someone on here who knows him PLEASE reach out to him? Like RIGHT NOW? He’s posting stuff on IG that has me worried for his well-being. Thank you.”

Platform Public Relations, which represents Stanfield, replied to Oswalt’s tweet and assuaged his fears, writing, “Everyone! LaKeith is well. Thank you for the concern. We have spoken to him. The love you all have is appreciated.” (Platform PR did not immediately respond to the Daily Dot’s request for further comment.)

Oswalt, in turn, issued a second tweet that read, “Just got confirmation Lakeith is okay. Sorry if I overreacted. Okay getting off Twitter for awhile. Text or DM someone you haven’t texted or DM’ed in awhile and tell them a cool memory you have about them. Good night.”

Stanfield updated his Instagram on Tuesday morning as well to let fans know he was not in danger. In a screenshot from what appears to be his notes app—and which is currently the only post on his Instagram—Stanfield wrote, “I’m ok everyone! I appreciate everyone checking in on me but I’m good. I’m not harming myself. Much love.”