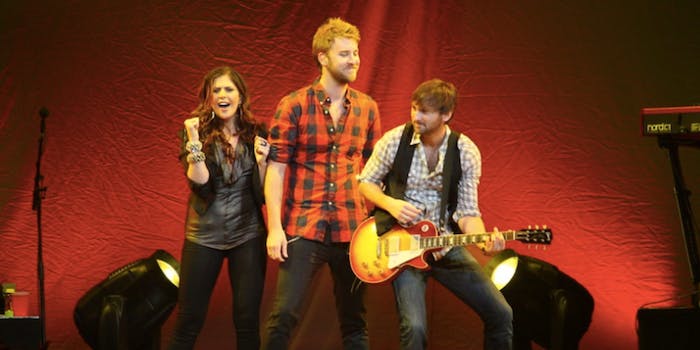 After being called out, Lady Antebellum changes name to Lady A

The band has received criticism for its name for almost a decade.

Lady Antebellum is no more.

After protests rocked the world following George Floyd’s death, the Grammy-winning, country trio has changed its name to Lady A.

The Nashville-based group announced the change in a letter to fans Thursday, alluding to several recent Black Lives Matter protests.

“We’ve watched and listened more than ever these last few weeks, and our hearts have been stirred with conviction,” the group wrote. “Our eyes opened wide to the injustices, inequality, and biases black women and men have always faced. Now, blind spots we didn’t even know existed have been revealed.”

In their statement, the group’s members—Charles Kelley, Hillary Scott, and Dave Haywood—said they took the name upon its founding in 2006 as a reference to the “‘antebellum-style home where we took our first photos.”

“We are deeply sorry for the hurt this has caused and for anyone who has felt unsafe, unseen, or unvalued,” the group wrote.

The band says the name change is the first in a series of steps it will take to “practice antiracism.”

Lady Antebellum is one of the nation’s top country groups, selling over 10 million albums and winning five Grammy Awards. The group also won record of the year and best country album for the 2009 hit “Need You Now.”

But the group’s name has long raised critics’ eyebrows. Nearly a decade ago, one writer says he called out the band for its name.

Another critic, writing in Ms. magazine in 2011, wrote that it “seems to me an example of the way we still—nearly 150 years after the end of the Civil War, nearly 50 years after the Civil Rights Act; and in a supposedly post-racial country led by a biracial president—glorify a culture that was based on the violent oppression of people of color.”

The switch to Lady A comes as people protest police bruality following the death of Floyd in Minneapolis.

The name is receiving mixed reviews on social media since the “A” still technically stands for Antebellum and because it took them almost a decade to make the change.

The band is also receiving heat for the change because the name Lady A is already taken––by a Black blues singer who’s used the name for 20 years.

“For them to not even reach out is pure privilege,” the original Lady A told Rolling Stone. “I’m not going to lay down and let this happen to me.”

Still, a band spokesperson told the New York Times that their corporate partners are “incredibly supportive of the change.”