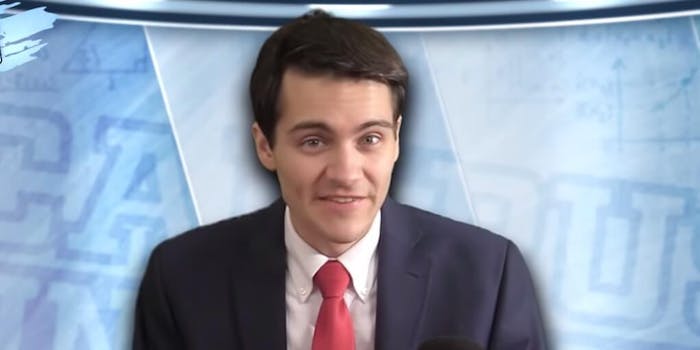 'To even compare the two is ludicrous.'

A right-wing pundit said a University of Virginia “Ladies Night” gym event is “sex-exclusive” and quoted an anonymous student who said the event pushes men to “the back of the bus.”

“The sex-exclusive event, an apparent violation of the anti-discrimination Title IX law, provides yet another compelling reason for why President Donald Trump definitely shouldn’t seize the school’s nearly $10 billion endowment,” Rob Shimshock wrote in a CNSNews opinion article on Jan. 29.

Shimshock, a UVA alum, quoted an unnamed student as saying, “When the primary marketing point of an event is who will be excluded, it makes me question why my absence at a public event is so important to my peers. I feel like we’re being made to sit in the back of the bus.”

Shimrock added, “In the back of the bus, or not allowed on the bus at all, for the ‘Ladies Night’ event description does not say that any part of the weight room will be available to male students during this time.” Male students will have access to three other gyms on campus during the event on Thursday.

His comment compares a women-only night at the gym Black people under Jim Crow-era laws who were forced to sit in the back of buses. It also comes right before the beginning of Black History Month and the celebration of the 107th birthday of Rosa Parks, whose defiance to give up her bus seat for white people changed race relations in America.

“This school makes me tired,” she wrote.

Marmorstein told the Daily Dot she found the comparison problematic for a number of reasons, the least of which is that there were other gyms open and accessible at the time of the event.

“The comparison to being made to sit at the back of the bus is ignorant and problematic,” she said. “ONE evening of being excluded from a weight room is not equivalent to hundreds of years of discrimination and segregation. To even compare the two is ludicrous.”

UVA’s recreational fitness organization, IM-Rec Sports, said it created the event because it’s aware “the weight room can be an intimidating place, for both women and men for a variety of reasons.”

Meanwhile, IM-Rec Sports created another gender-specific event. Marmorstien provided screenshots of a Facebook event page for “Men’s Night” to take place on April 2. By the time of publication, the event had been renamed to “Weight Room 101.”

Michael Shipe, director of marketing and communications for IM-Rec Sports, said the center organized the second event following a recommendation by the University’s Office of Equal Opportunity and Civil Rights to “have an opportunity for male and non-binary students equivalent to the opportunity given at Ladies Night.”

But the point of a “Ladies Night” wasn’t to create “exclusion,” as argued in Shimshock’s article. It was to carve out room in an otherwise male-dominated space.

“Despite our best efforts, some people do not feel comfortable in the weight room. We designed all of our programs with that in mind—including the men’s Weight Room 101 and women’s Ladies Night in the weight room,” Shipe told the Daily Dot in an email. He also said men could use any of the three other gyms on campus during the Ladies Night event.

“This event is in no way discounting the presence of men at the gym,” Marmorstein told the Daily Dot. “However, in a male dominated space such as a weight room, women (I myself have experienced this) can feel intimidated, uncomfortable, or unwelcome.”

She added that she has experienced men recording her or approaching her while lifting which made it an uncomfortable atmosphere for her, and made her “not want to go into the weight room.”

“‘Ladies Night’ as I understand it provides people with the opportunity to lift or learn to lift without fear of judgment or scrutiny,” Marmorstein said.

Shimrock did not immediately respond to the Daily Dot’s request for comment.