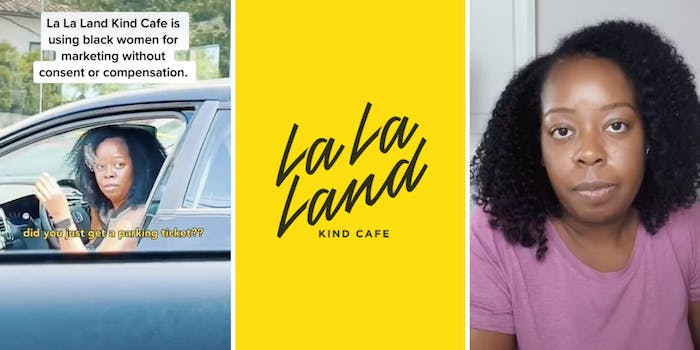 ‘I am not their customer, and they need to take it down’: Woman puts cafe on blast for using video of her for free marketing

'They followed me down the street when I was minding my business.'

A woman says that a Dallas-based cafe chain is using a video of her that was taken without her permission to promote the business even after she requested the video be removed.

Debra Johnson posted a TikTok on Tuesday calling out workers associated with La La Land Kind Cafe for recording her without her permission and uploading the footage to TikTok. Johnson says she was “ambushed” by cafe workers who played a joke on her.

“They followed me down the street when I was minding my business. They pulled up behind me and blocked me in. They played a joke on me while recording me,” Johnson says in the TikTok, which had over 18,000 views on Wednesday. She says that although she is seen laughing in the video, she was nervous during the incident.

The business regularly posts “drive-by kindness” videos on TikTok, including one that received over 24 million views.

La La Land Kind Cafe’s website states that the company aims to “set the example that all businesses can, and need to be caring for our people, our planet, and our society.” The website also states the cafe hires adults who have aged out of foster care.

Johnson says the cafe is specifically using Black women “for marketing without consent or compensation” and that she asked La La Land to remove the TikTok, which had over 9 million views on Wednesday.

“I am not their customer, and they need to take [the TikTok] down,” Johnson says in her video.

“You’re so right. If they don’t want to compensate you, then they can remove the video of you from their page,” @weedsmoothie commented.

“She’s asked them to take it down and that should be the end of it,” @certifiedtextures wrote.

“You are right for doing this,” @theeverydaylady commented. “They make it seem like something so great they are doing.”

In follow-up Tiktoks, Johnson shows a screenshot of a message she sent to La La Land on TikTok, screen recordings of herself reporting the video twice, and an email that she sent to the restaurant. In the comments of a TikTok, Johnson says she also messaged La La Land on Yelp and LinkedIn.

Johnson’s message to TikTok references a “Texas law” that says that the cafe needed to “receive permission before publishing [her] likeness.” Texas defines misappropriation of someone’s likeness as when it is used for someone else’s benefit, usually commercial. If Johnson were able to prove in a court of law that La La Land used her image for its benefit, she might be able to receive financial damages.

The Daily Dot reached out to La La Land Kind Cafe via email and to Johnson via TikTok comment.