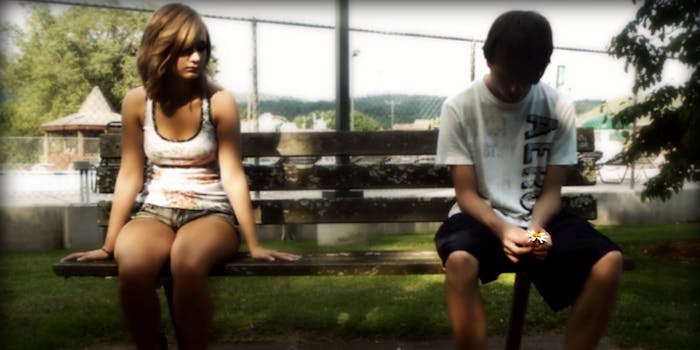 Don’t break up in front of this guy, or everything you say might end up on Twitter

Kyle Ayers was just trying to enjoy a night on a Brooklyn rooftop. Then this couple stormed upstairs.

Breakups are ugly facts of life in the dating world. No matter who instigates the termination of a relationship, it’s a safe bet that neither partner wants to remember it forever.

This is why you shouldn’t break up in front of someone who is live-tweeting everything.

Comedian Kyle Ayers was passing time on the roof of his Brooklyn apartment when a couple in the midst of an argument burst out of the stairwell, dragging their vocalized relationship issues right out into public. Ayers did what any of us with no scruples whatsoever would do: He live-tweeted the exchange as it unfolded. He made sure to sign each tweet with the hashtag #roofbreakup to keep his thousands of followers updated.

A couple is breaking up on my roof right now. I was just trying to enjoy the view. Now I will live tweet the breakup. #roofbreakup

Ayers passed on nearly a half-hour’s worth of bickering before he was almost outed.

“I don’t think we need to talk about this up here with some random guy over there.” -guy (uh oh, I’m that guy over here) #roofbreak

Fortunately, the girl’s soon-to-be-ex made a save.

“He’s just sitting on his fucking phone he doesn’t care (talking about me). Answer my question.” -girl (hahahahahahaha) #roofbreakup

The fight lingered on, with Ayers sharing some pretty memorable exchanges.

“I’m not talking about love on a roof in Brooklyn.” -guy #roofbreakup

“Are we getting pizza or what? I don’t mean to change the subject but are we?” -guy #roofbreakup

“Why don’t you get pizza with ‘someone from work texts?'” -girl (holy shit good burn right there) #roofbreakup

The girl, “Rachel,” soon declared that she “was giving up” and left her former partner on the roof by his lonesome.

Rachel disappears around the corner into the stairwell. Guy takes a puff of his cigarette and turns to the manhattan skyline. #roofbreakup

Next time a nasty breakup unfolds in front of him, we hope Ayers add some multimedia to his reporting. We’re pretty sure, for instance, that no one’s Vined a breakup yet.