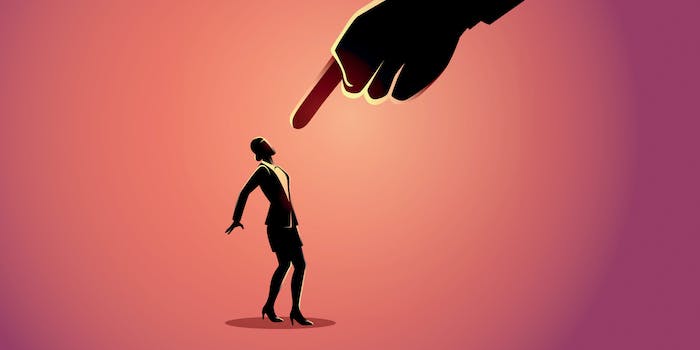 How a virtual kink con taught me about shame

At SizeCon, I uncovered deep shame—resilience.

As a 13-year-old, Yaoi-Con fascinated me. I knew about Otakon, New York Comic-Con, and all the other big anime and geek conventions, but the idea that queer adults (mostly women) would go to a convention and talk specifically about their sexual desires was as exhilarating as it was embarrassing. What kind of pervert would go to a con just to lust after hot anime boys?

If Yaoi-Con piqued my interest as a teen, then SizeCon gripped it as an adult. SizeCon is a Greater New York City area kink con based entirely around the size kink community, or kinksters who have an interest in bodies and body parts that change size. While there are many kinks that fit under this umbrella, such as muscle growth, breast expansion, feederism, and inflation, there’s no better core interest to the size kink world than microphilia and macrophilia. These kinks involve an attraction to others or oneself becoming smaller or larger, respectively. Macro in particular is not just my favorite kink but my long-time favorite kink, at the root of my very first erotic feelings and thoughts.

Admitting that makes me blush, which is a little out-of-character for a kink writer. But shame is not a one-time occurrence, and for that reason, it’s prevented me from connecting with so many parts of the kink community. Case in point, I’ve long fantasized about attending SizeCon, only to immediately shut down the idea. It would be way too much for me to handle an entire convention dedicated to my deepest fantasy.

I didn’t actually put a word to this feeling until I did attend SizeCon Micro last weekend. Since COVID-19 has essentially wiped out the 2020 convention season, the SizeCon staff hosted a virtual, miniature kink con available through OnlyFans. For a $15 entry fee, users could join a live stream where size community writers, artists, models, and researchers came together and hosted panels about everything from edgeplay in the size world to writing inclusive size stories for kinksters of color. I loved it and learned so much. And as a trans lesbian, I felt seen and appreciated; many panelists were queer women, including queer trans women.

But as much as I enjoyed the experience and felt motivated to go to SizeCon proper, I also felt deeply uncomfortable. This was the first time I was in a room dedicated specifically to celebrating and unapologetically enjoying macrophilia, microphilia, and vore (a kink for consuming another). Sure, it was a virtual kink con, and I purposefully tried it since it was the kinky equivalent of tipping my toe in the water. But even as I settled in, I could still feel a pounding impulse in the back of my mind to get out, run, and go back to something safer like binging Risk of Rain 2.

This struck me as out-of-character. But when I reflected on my experiences in the larger kink community, I realized being a vore-loving macrophile made me a black sheep. The first BDSM community space I went to was an underground kink club in college that mostly focused on rope play and domination and submission (D/s). When I hosted a presentation on yes/no/maybe lists and mentioned how vore and furry content were available on the list builder F-List, attendees laughed, and I felt deeply ashamed of myself. Other spaces have held a similar, unspoken policy of considering some kinks more equal than others. Most of the sex clubs, 18+ panels, and sex ed courses I’ve attended make plenty of room for D/s, S/M, and bondage but don’t really care for anything more fantastical. Or if it comes up, it quickly becomes a joke.

For a fantasy kinkster like me, this became paradoxical. With each kink space I entered, it became easier to embrace my interest in leather, latex, and domination but harder to open up about my vore, giantess, and feederism kinks. Drinking water out of a dog bowl for Daddy isn’t the same as asking a dominant woman to pretend she’s a skyscraper-sized woman that wants to eat you. And let’s be real, the former makes more sense to most other queers. So SizeCon Micro came in at the crossroad of this anxiety: the discomfort of being seen bonding with others over a stigmatized kink at the very heart of my sexuality.

But then I attended SizeCon Micro’s edgeplay panel Welcome to the Darkside, which discussed things like vore, piss and scat play, and sadistic role-play in the macro world. Shame was a key theme of the panel, and it was something SizeCon founder Jitensha addressed herself during the presentation. When I reached out to her after the fact to talk to her about shame and kink, I assumed engineering a fantasy kink con was the end result of a long road to empowerment and unapologetic pride. In reality, Jitensha told me that SizeCon began not out of shamelessness but a debilitating experience with public size kink flirting.

“Back when I was a newlywed with my husband, who was very much aware of my size kink, he took me out on a date to a museum,” Jitensha told me. “He started saying some pretty harmless size stuff to me, like he’d put me in his pocket. I told him to stop, but again made some sweet size comment. I’m a pretty submissive gal, and I like some harder, darker stuff, but I was still mortified, I became so overwhelmed I ran away so he couldn’t see me cry.”

“One summer I was invited by one of my girlfriends to go to Anthrocon, a popular furry convention,” she said. “When I got there I was in literal awe at how accepting of a community it was. Very accepting of LGBTQ folks and the icing on the cake—macro furs!”

When Jitensha came back to New York, she pitched the idea for a size-based convention to a size meetup group she founded, and the team worked to bring the idea to life in 2016. Years later, shame still reemerges in her life. But now Jitensha knows she isn’t alone, and she has the tools to navigate when those nasty feelings come up to the surface.

“I’ve been very lucky that I have a supportive partner who’s not only encouraged me but has actively invited this kink into his life,” she told me. “I realized I had so much to learn about my husband, both his kinky and more tame vanilla fantasies, that I stopped seeing myself as other.”

In a society that has long insisted sex must be purely reproductive and solely take place between a white straight man and woman, how could we not feel shame for enjoying our bodies? Everyone deals with sexual shame to some extent, and all of us have to walk that journey to challenge where we learned to hate our desires. That’s doubly true for marginalized kinksters who are told their bodies are disgusting, particularly queer women, trans women, and women of color.

“I think we have a lot of shame because not only is our fantasy different from what’s considered normal, our fantasy lives completely in our headspace,” Jitensha told me. “Keeping it to yourself can make you depressed, while sharing it with a partner who dismisses you can be devastating after being so vulnerable.”

That’s the thing, though: The escape from shame is not running from it, but accepting it and challenging it. Sure, I was ashamed of going to SizeCon Micro, but I was also resilient. I let myself feel uncomfortable. As I let this discomfort sit, I learned that I could simultaneously feel uncomfortable and enjoy myself. I had an amazing time and found myself giggling at my computer chair as other women talked about their micro and macro size fantasies. I don’t regret the experience; if anything, I’m grateful I put a name to the shame I have around one of my favorite things. Now that I know what I’m feeling, I can accept it and challenge it.

“I think the thing that has helped me come to term with the guilt [around sexual desires are] two things. First, my fantasies are fantasies and they don’t hurt anyone,” Jitensha said. “The second thing that helped was focusing on valuing myself. I think many of us, especially those who may have more vanilla partners, we think of ourselves as broken. As our partner is the default, and we are broken. Somehow they are doing us a favor. And that’s not right!”

The more we give into shame, the more our shame grows. The less we entertain it, the less shame controls our life. We all feel at least a little embarrassed of ourselves. None of us are immune. But we can choose not to be ashamed of ourselves. Personally speaking, it’s much more fun to live a life where fantasies about giant women smashing apartment buildings run wild in my head.