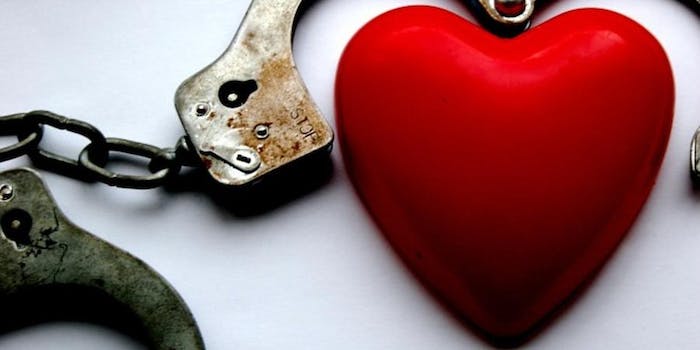 The encounter with P. made me profoundly uncomfortable, but I refused to admit to myself that anything inappropriate had happened. “I didn’t say no,” I rationalized, “so it was consensual. Hadn’t I fantasized about submitting in that way?”

I called my cool, older friend, who was also a member of the kink scene, and described the experience to her. “It was so hot,” I told her.

“No, it was great, he was so dominant. It was like my fantasies,” I told her in a voice that belied my anxieties, wanting to sound brave and adventurous. I didn’t want to admit that maybe I hadn’t been on board for everything. I was smarter than that, wasn’t I? I must have wanted it.

I fell into a crippling depression for a week after this incident. It took me fifteen years to realize that when P. suggested “play rape” in the middle of the scene, he was actually using kink to justify actually raping me.

I was reminded of this incident recently, when I attended an event hosted by some friends from the kink scene. At one point in the evening, a male attendee cornered me, grabbed my breasts, rubbed his penis on me, and verbally harassed me.

Yet consent violations inevitably occur in the kink community—not because kink is an intrinsically non-consensual activity, but because consent violations happen everywhere, including in vanilla life. When these violations take place, the community tends to handle them poorly. We are so desperate to paint ourselves as consent-loving, happy, “normal” people that there are no real safeguards in place to deal with real problems when they arise.

The conversation over kink and consent has surfaced on a larger, more mainstream level with the controversy over Fifty Shades of Grey, which has been intensely criticized by kinksters and their sex-positive advocates for portraying an unhealthy, nonconsensual kinky relationship. (Ana is a virgin when she and Christian meet, and for the majority of the first book she seems horrified by his kinky desires, acquiescing to them only to please her partner.)

In her essay “Consent Isn’t Enough: The Troubling Sex of Fifty Shades” in the Atlantic, Emma Green says:

Out of context, kink can look like abuse or domestic violence to the outsider, which it decidedly is not. But members of the kink community also aren’t very good at policing our own, and what I see happening again and again is victims of predators being swept under the rug, forced to leave communities that have become intolerable while the predators remain to prey upon the next batch of innocent newbies.

For instance, when I told a few confidantes that a certain prominent male dominant had handcuffed me and duck-taped a plastic bag over my face without prior negotiation, then subsequently ignored my safe signal, I was told that he was actually a really great guy, and that it was my fault because I should have “known about his reputation.” I left the scene because I couldn’t pretend that I felt OK about these things, and I did not wish to put myself in emotionally or physically vulnerable situations with these people.

It took me over 15 years to admit to myself that P., the man I referred to at the beginning of this article, had crossed the line and committed a consent violation, or that he took advantage of my youthful inexperience and desire to submit, instead of doing what I had actually asked him to do: Give me a spanking.

P. and Christian Grey both fall into the category of what Dan Savage recently described as someone who uses their kinks to explain away their sexually abusive behavior. After disgraced former CBC host Jian Ghomeshi used his kinks as a justification for the assault allegations levied against him, Savage tweeted: “I oppose the demonization of consensual kinksters. I despise abusers who cover for their crimes by claiming to be consensual kinksters.” Savage hit the nail on the head: The problem is not kink itself—it’s confusing kink with abuse, or pretending abuse is kink when it’s clearly not.

Abusers definitely exist within kink communities, just as they exist in the vanilla world.

Most people in the kink community are not abusers, and labeling kink as abuse when it is not has the potential to destroy lives. But abusers definitely exist within kink communities, just as they exist in the vanilla world. These people are often very socially influential and powerful. They are often the people who throw the best parties or run the best clubs. They own the nicest toys and have reputations as the “edgiest” players. They are often sexy, charismatic, and manipulative. They are the sociopaths who will look their victims in the eye and gaslight them into believing that a horrifying sexual encounter they didn’t consent to was all a big misunderstanding or that they must have really wanted it all along.

A perfect example of this phenomenon occurred when I attended a play party in the small college town where I was attending grad school. I had been to several of these parties in the past and always had fun, but this night felt distinctly different. There was a guy at the party who had a reputation for having bad boundaries who wouldn’t stop touching me and a lot of other women at the party, even when they made it clear they didn’t want to be touched. I even saw him forcibly bear hugging a girl while she screamed, “No.”

Meanwhile, in the hot tub, an older dude kept touching my friend’s penis, even as my friend repeatedly told him to stop. (When I confronted this guy after the party, he claimed that it was a “game” they were playing and that it was consensual, even after my friend explicitly told me otherwise.) I also watched a blindfolded friend get genitally fingered by the host of the party, despite the fact that she had not consented to playing with him. She appeared to be in distress, but then again so do most submissives in-scene. I had no idea that this wasn’t something she had agreed to in advance, and I didn’t feel like it was my place to step in and stop it.

All of this could’ve been prevented had there been a dungeon monitor (or an informal kink party security person) at this party. I later found out that the host, the same man who had nonconsensually fingered my friend, had made a deliberate decision not to have dungeon monitors at his parties. This man was rich, had a nice house, and was generally considered a “nice” guy by the community. Yet after that evening, reports emerged that he’d been nonconsensually fingering women and violating consent for years. But his victims were afraid of speaking out, because he was well-liked and had a lot of power.

Does this scenario sound familiar at all? It’s really not that different than the recent string of allegations levied against Bill Cosby and the aforementioned Ghomeshi. In Cosby’s case, it’s notable that as in the anecdote above, the violations had been occurring for years, but victims were afraid to speak out against a powerful person. It highlights the fact that the consent violations that occur in the kink scene are not much different than those that happen in the vanilla world, except that those who practice erotic power exchange should be twice as careful about practicing consent because of what is at stake.

“I was told I was doing a disservice to the community by speaking out, that being sexually cajoled must be some sort of fetish for me, that there are precautions I could’ve/should’ve taken to avoid it (thereby suggesting that by not taking enough precautions it was partially my responsibility),” she wrote, adding: “If I had written this when I was 18-22, I would have been violently triggered and probably left the ‘community’ myself.”

In 2013, kink educator Graydancer blogged about his concerns regarding organizers of the popular Shibaricon, “the world’s premier international pansexual annual rope bondage educational conference.” The conference had just hired an instructor who had been accused of sexual assault multiple times. Unsurprisingly, these attempts to call out abuse were met with a tremendous amount of controversy and pushback from the Fetlife community, in the form of hundreds of comments, journal entries, and blog posts.

It is typical for kink advocates and educators, including myself, to want to paint kink as this happy, wonderful, fun place where consent violations never ever happen because we’re all so emotionally evolved and amazing at communication. We’re so desperate to reverse the stigma and allegations of abuse and mental illness levied at kinksters that when these consent issues pop up, we whitewash—or, at worse, ignore—them to try to gain mainstream acceptance and approval.

We need to stand up for victims of sexual assault, instead of dismissing their concerns or shunning them. We need to work to ensure that consent violations are handled in a way that is not dismissive or traumatic to victims. We need to hold ourselves to a higher standard than the outside world and be twice as stringent about not letting the abusers and creeps slip through the cracks. We need to work on strategies for making the BDSM scene feel like the safe, wonderful place we tell the outside world it is. If we do the necessary work, I have faith that we can rebuild this community. And if we do, I might even consider coming back.

Photo via Jason Clapp/Flickr (CC BY 2.0)