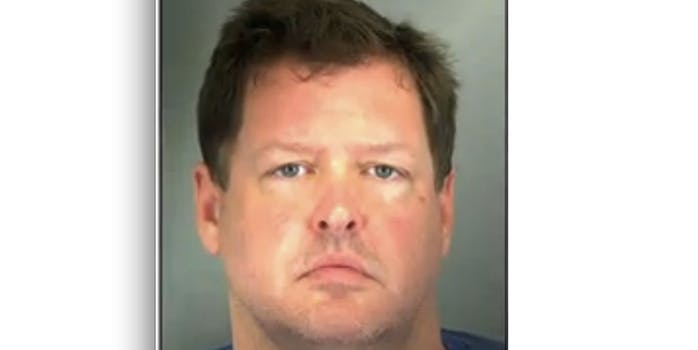 The suspect is a convicted sex offender who police believe could be involved in seven murders.

Over the weekend, police in South Carolina found a woman chained up in a shipping container and her boyfriend dead on the property of a man now suspected in seven murders.

The couple, Kala Brown and Charlie Carver, went missing around Aug. 31, though someone claiming to be Carver continued to post on his Facebook page over the past two months. The posts suggested the pair had gotten married and were expecting a daughter, but the messages were odd and rambling, and eventually they drew national attention to the case. Within those posts were lyrics to an Eagles song that may link registered sex offender and suspect Todd Kohlhepp to the kiddings, murder, and postings.

A verse of “Hotel California”—which includes “Last thing I remember, I was running for the door”—not only appeared on Carer’s Facebook’s page, but was also referenced in an Amazon review of padlocks that Kohlhepp wrote. These were padlocks that Kohlhepp said in another review he had used on a shipping container. Brown was discovered in a shipping container “chained up like a dog.”

“Facebook has always been real good to work with us in this kind of investigation, so we’re just trying to figure it out if it was him or somebody else that did it,” Spartanburg County Sheriff Chuck Wright said at a press conference. He said “it’s very possible” Kohlhepp wrote the Facebook posts on Carver’s account, though the sheriff’s department has yet to serve Facebook with a warrant, according to the Daily Beast.

A friend of Brown’s told the AP that Brown and Carver had been hired to clean properties that Kohlhepp, a 45-year-old realtor, was planning to sell. Then he “pulled out a gun and took them hostage.”

Police believe Kohlhepp could be connected to a total of seven murders. In 1986, he was convicted of raping a 14-year-old girl, for which he spent 15 years in prison. Another body was discovered on Monday, as police continue to search his 100-acre property.