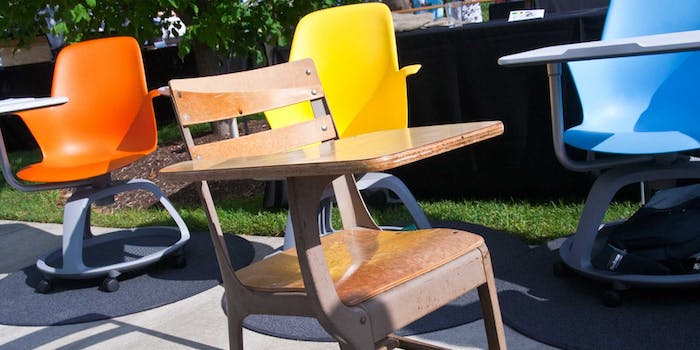 Kindergarten teacher posts a photo of her class on Tinder

We should all just abide by the rule that you must be 18-years-old to enter Tinder.

But one of the most egregious social media offenses is to put a photo from your workplace on your profile. This applies tenfold if your job involves interacting with minors, and it applies a billionfold if the profile is on a hookup app like Tinder.

Tinder requires you to log in through Facebook and select photos from your profile. The photo is apparently from a Facebook page Carnley set up for her kindergarten class at Cross Timbers Elementary in Edmond, OK (for what it’s worth, Carnley is not listed as a staff member on the Cross Timbers website).

In her hypothetical defense, it’s possible Carnley signed up for Tinder and just chose the first picture that came up, or maybe she connected with her classroom Facebook page accidentally, instead of her personal one. Or maybe she doesn’t get the mentality that Tinder is for hookups and a cute picture of your students is, uh… totally inappropriate.

Although there’s been a lot of talk about whether it’s appropriate for teachers to use social media to discuss their students and personal lives—one special ed teacher in San Jose was recently terminated for referring to a student as a “hot mess” on Facebook—it’s apparently not uncommon for teachers to use social media as an educational tool, and as a way to keep parents abreast of what goes on in the classroom. But yeah, a kindergarten class photo on a social dating app probably doesn’t fall into this category.

Update: Carnley responded to our inquiries about her picture, telling us it was indeed a mistake that put her classroom and students on her Tinder profile. “Yeah I am not exactly sure how that happened,” she explained. “I know Tinder takes photos from your Facebook account, but my Facebook linked to Tinder is not this Facebook. I am not sure how that happened because I am never on this Facebook when using that app.”

She also said she deleted her Tinder account so things should all be taken care of.

The photo also appears to have been removed from her Facebook page.