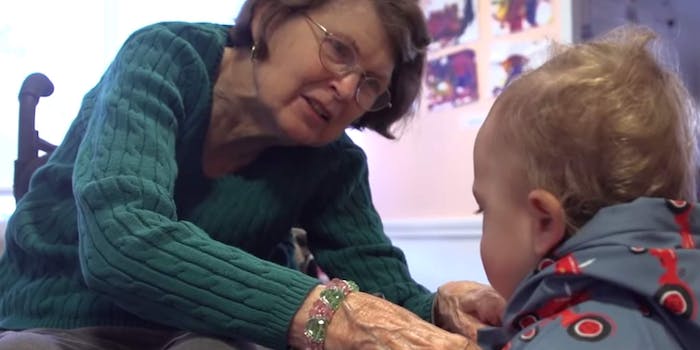 An intergenerational pairing for the ages.

American culture has a complicated relationship with the elderly population—according to a 2013 report from the U.S. Department of Health and Human Services, 1.4 million elders live in nearly 16,000 nursing homes across the country. And though the numbers themselves are neither shocking nor troubling, America’s profusion of nursing homes for the elderly has experts wondering about their benefits, especially whether it furthers an “out of sight, out of mind” cultural mentality.

It was some of these same concerns that inspired adjunct Seattle University professor and filmmaker Evan Briggs to connect with Seattle’s Intergenerational Learning Center, a preschool housed inside of the Providence Mount St. Vincent care center for the elderly. In a genial and progressive approach to caretaking, the center offers a space where activities like music and dance classes, art, storytelling, visiting time, even lunch are shared by both old and young. Though Briggs said that she had wanted to “start a conversation” about aging for years, in the ILC she finally found her chance in the form of Present Perfect, a documentary she’s independently producing.

“I just felt like that was a topic that was worthy of some serious discussion and exploration,” she told Today. “Because, the truth is, we have such an interesting cultural relationship to aging.”

Briggs says that a friend told her about the ILC, and when she reached out to the center their response was overwhelmingly positive.”I loved that lens, because it had a hopeful quality to it,” she said. “As a culture, we don’t have a healthy relationship to aging, but I didn’t want the film to be depressing.”

Briggs spent about a year at the center documenting the day-to-day lives and activities of its elder and younger population. When she recently set up a Kickstarter to fund the independent film with a modest goal of $50,000, that goal was not only reached but exceeded within two weeks. With a new stretch goal of $100,000, Briggs writes on the page that the extra funds will cover various post-production costs including music, color correction, audio mix, and graphics. Basically, the more money raised for the film, the faster it can be released and warm hearts even two sizes too small.

“It’s so amazing to see that this story is resonating so broadly,” Briggs told Today. “I think the global attention is saying something about where we are as a society. And I’m optimistic about the possibilities for changing the way we think about aging.”

For a dose of “aww” to last a lifetime, try not to happy-cry your way through Briggs’ trailer, below.