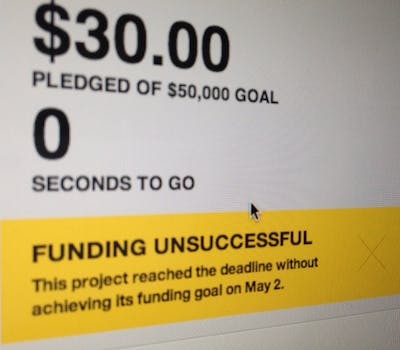 There won't be any participation ribbons for losers in crowdfunding.

Kickstarter showcases its successes like a proud mother at her child’s graduation ceremony.

It’s those failures that are a lot harder to come by.

Thanks to a spout of weekend work from tech journalist and conversational hacker Dan Misener, über-popular crowdfunding platform Kickstarter has been exposed as a site that flaunts its successes and hides its failures.

“Visit Kickstarter’s main page, click around, and without using the search box, try to find a project that isn’t either: a) Successful b) In progress,” Misener wrote this morning on his personal blog.

“Spend more than a few minutes poking around, and you’ll realize that Kickstarter’s front page and Discover pages are clearly built to highlight projects that are currently seeking funding, or have already been successfully funded.”

Misener thought the lack of failure looked suspicious, so he wrote up a scraper to cut through Kickstarter’s Discover pages and extract project details from every campaign it could find.

His scraper found 27,399 projects, all of which were successful or in progress. At no point did his scraper come across a single project that had failed to get funded.

That Kickstarter would spotlight funded projects should come as no surprise—success makes the site look better and encourages more campaign activity.

Rather, it’s the lengths to which the New York City-based site is willing to go to hide its failed projects that should have skeptics raising an eyebrow.

As Misener noted, Kickstarter inserts a robots meta tag—<meta name=”robots” content=”no index”/>—into the header framework of every single project that fails to get funded. The tag tells robots not to index the page it’s on, rendering each project unsearchable via Google, Bing, or any other search engine. Even if you know the exact title of the Kickstarter campaign and can regurgitate lines from its descriptions into a search engine, you won’t be able to find it.

Kickstarter does keep failed projects live and on the site. If you can remember the campaign’s title—Misener referenced Instaprint—you can find it using the homepage search bar, but that’s the only way to find it.

What’s it mean for Kickstarter? Not much in the long run. Pebble just raised $10 million to make a watch, and Kickstarter’s model is popular enough that this misleading practice won’t have much of an effect on the influx of campaigns that come through every day.

But it does strike as insecure; like the site’s trying to sweep imperfection under the rug.