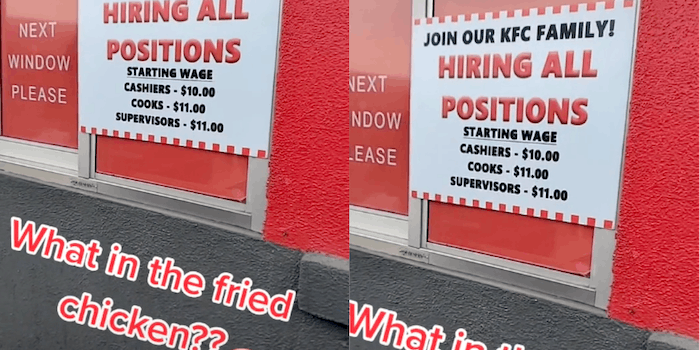 ‘That’s why they don’t have employees’: KFC criticized in viral TikTok for posting low wages at drive-thru window—even for supervisors

'That's gotta be a misprint.'

A TikTok creator calls out the fast-food restaurant chain KFC for advertising low wages on a sign outside of its restaurant that encouraged people to apply.

The creator, Mia Driskell, tells the Daily Dot that she was taking her 7-year-old son to get lunch at her local KFC in Las Vegas. (She is not a KFC employee.) She said he asked what the sign said and when she read it to him, he said that $10 is not a lot of money. “I said ‘No it’s not, let’s make a TikTok about it.’ That wage is too small for here in Las Vegas, Nevada. How can a person live off of that? There’s no way,” Driskell tells the Daily Dot.

In the video, which has over 19,000 views, viewers can hear Driskell saying: “What I wanna know is if I’m the supervisor, why am I making the same dollar amount as the cook and I’m only making one dollar more than the cashier? Like what the fuck?”

While Driskell has not received any comment from KFC regarding its wages, TikTok users left over a hundred comments on her video. “That’s why they don’t have employees. Pay better!!!” one person wrote. Another person said, “That’s gotta be a misprint.”

According to Las Vegas’ CBS affiliate station 8 News, the minimum wage in Las Vegas was bumped to $8.75 for employees being offered health benefits this year. As of October, the average cost of rent in Las Vegas is $1,800 a month for a one-bedroom apartment, per KTNV.

The Daily Dot has reached out to KFC for comment.