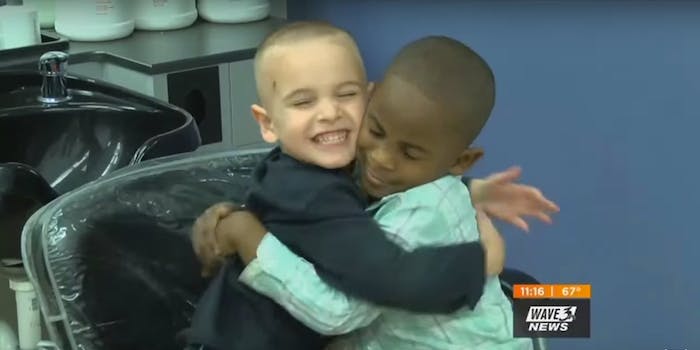 She won't be able to tell us apart, they said.

Children might be our future, but two preschoolers are already giving their community hope for the present.

On Tuesday, 5-year-old friends Jax and Reddy from Louisville, Kentucky, went with their families to go get Jax’s hair cut. It was all a part of their grand scheme—Jax wanted to get a buzz cut like Reddy, that way their teacher couldn’t tell them apart.

The catch, however, is that Reddy is black and Jax is white.

Jax’s mother, Lydia Rosebush, first shared this story on Facebook last week, posting a Christmas photo of the boys. In the post, she wrote she and Jax were talking about him needing a haircut, and he told her he wanted Reddy’s hairstyle so they could trick the teacher.

This morning Jax and I were discussing his wild hair. I told him that he needed a haircut this weekend. He said that…

The story has since gone viral, and Rosebush told local station WAVE 3 News that she never anticipated this kind of outpouring reaction from thousands of people and news outlets.

“I just made the post because my kid is hilarious and cute… It just struck me as funny that Jax doesn’t even notice that Reddy is a different color. When he describes Reddy he never mentions it,” Rosebush told the station. “I thought with all the hate in the world today, we could use this lesson from an almost 5-year-old.”

The following Tuesday, the news station accompanied Reddy and Jax’s families for Jax’s haircut, with the two boys giggling and shouting throughout the affair.

WAVE 3 reported that the next day when the boys came to school, their teacher played along, pretending she could tell Reddy from Jax and vice versa.

It’s an uplifting story during a time when hate speech and racist attacks are running high in this country. However, Jax and Reddy’s “colorblindness” isn’t the answer in a society where racism manifests itself in more ways than just “seeing” color.

Not to be a downer, but unfortunately, Jax and Reddy will eventually both learn about the prejudices that people hold against people of color—and they should, if for nothing else, to understand how we got our country into such a racist mess in the first place. Projecting our hopes onto two preschoolers won’t eliminate racism altogether—because in order to solve the problem, we must acknowledge racism exists.

Then again, Jax and Reddy are 5 years old and adorable and loving, so it’s fine just revel in that too.