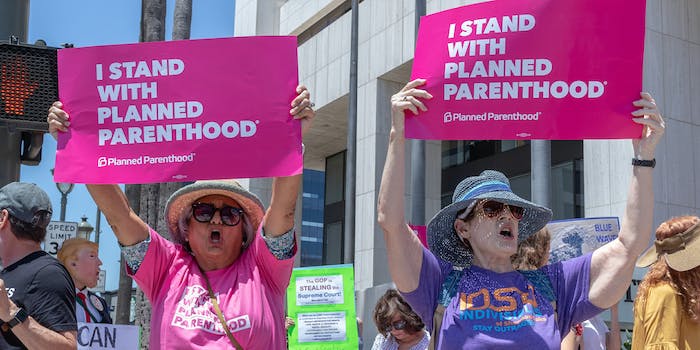 Anti-abortion advocates are disappointed, but pro-choice supporters are breathing a sigh of relief.

The justices voted 6-3 on Monday to turn away two cases from Louisiana and Kansas, with Chief Justice John Roberts and Kavanaugh joining their liberal colleagues in voting against it.

By passing on these two cases, the Supreme Court affirms a lower court’s ruling that these states cannot prevent Planned Parenthood from being funded through Medicaid.

Even though no federal funds are used for abortion at Planned Parenthood, anti-abortion advocates have for years been attempting to defund the organization entirely because of its abortion services. These cases were another attempt to do so.

While the Supreme Court affirms the lower court’s ruling to protect the rights of patients to receive Planned Parenthood coverage in Louisiana and Kansas, it doesn’t challenge the differing decisions of other federal courts, which have allowed some states to end Medicaid funding and contracts with providers like Planned Parenthood.

Although Kavanaugh stated publicly that he saw Roe v. Wade as an “important precedent,” leaked emails that were reviewed by the Senate Judiciary Committee seemed to show a less clear picture. In one email, Kavanaugh wrote, “I am not sure that all legal scholars refer to Roe as the settled law of the land at the Supreme Court level since Court can always overrule its precedent, and three current Justices on the Court would do so.”

Those who hoped he was set on changing that precedent were disappointed by his vote, as were some of his colleagues.

Notably, Justice Clarence Thomas wrote in his dissent that by not taking up the case they were allowing people in different states to have different healthcare rights.

The president of the anti-abortion organization Susan B. Anthony List, Marjorie Dannenfelser, said in a statement that they were “disappointed” by the Supreme Court’s decision, and urged Trump to take action to “prevent taxpayer funding of the abortion industry.”

Planned Parenthood president Leana Wen, on the other hand, said they were, “pleased that lower court rulings protecting patients remain in place.”