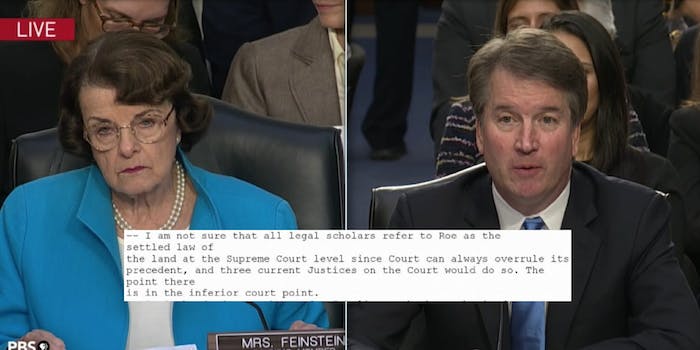 Many believe this proves he will try to overturn the legal right to an abortion.

In 2003, during his time as a White House lawyer under former President George W. Bush, Supreme Court nominee Brett Kavanaugh once wrote that he wasn’t sure “all legal scholars refer to Roe [v. Wade] as the settled law of the land at the Supreme Court level.”

The statement was written in an email of thousands of “committee confidential” documents turned over to the Senate Judiciary Committee and anonymously leaked to the New York Times.  It contradicts an answer Kavanaugh gave to Sen. Dianne Feinstein during the second day of his confirmation hearings, during which he called Roe v. Wade an “important precedent of the Supreme Court.”

According to the Times, the email was among several that an “unknown” person secretly emailed to the publication. In the email, Kavanaugh was offering suggestions to a draft opinion piece written by supporters of an appeals court nominee selected by Bush. The draft read “it is widely accepted by legal scholars across the board that Roe v. Wade and its progeny are the settled law of the land.”

Kavanaugh contested that line, however, writing, “I am not sure that all legal scholars refer to Roe as the settled law of the land at the Supreme Court level since Court can always overrule its precedent, and three current Justices on the Court would do so.”

According to the Times‘ analysis, Kavanaugh’s email specifically referred to then-sitting justices who had dissented against Planned Parenthood v. Casey, who might not have viewed Roe as “settled law.” The publication also concluded that Kavanaugh stopped short of “saying whether he personally believed that the abortion rights precedent should be considered a settled legal issue.”

Speaking the Senate Judiciary Committee on Wednesday, a day before the leak, Kavanaugh stated that he saw the Supreme Court ruling as precedent. He also previously told Sen. Susan Collins (R-Maine) that the ruling was “settled law,” leading her to believe, she has asserted, that he wouldn’t vote to overturn Roe v. Wade.

However, across Twitter many saw this unearthed email as a smoking gun to Kavanaugh’s personal beliefs regarding Roe v. Wade and its ability to be overturned, proving that he mislead senators and would be a threat to a woman’s right to abortion if voted to the Supreme Court.

Now the American people know what we know. We have every reason to believe Kavanaugh will overturn Roe v. Wade. https://t.co/P4vEFdIezk

If Brett Kavanaugh privately asserts Roe is *not* settled law and can *always* be overruled, but publicly asserts it is a “double precedent” — that is huge for the Senate to consider.

These two leaked Committee Confidential emails, directly from Kavanaugh on Roe v Wade and Racial Profiling show EXACTLY who Brett Kavanaugh is and that he's been lying for the last 3 days. #StopKavanaugh pic.twitter.com/TdvjCVPRYB

Judge Kavanaugh calls Roe and Casey “precedent on precedent” and says it’s “quite important” precedent for that reason. That tells us ABSOLUTELY NOTHING. @SenatorCollins and Sen. @lisamurkowski CANNOT vote yes without betraying their ostensible commitments to the rights of women.

Initially, the confidentiality of these documents meant that they couldn’t be made public, nor asked about during Kavanaugh’s hearings. However, on Thursday, after the Times story broke, Feinstein read the email to the nominee during his hearing and asked him again if Roe v. Wade was “correctly settled.” Kavanaugh downplayed his response, stating that he specifically speaking about “legal scholars” such as then-Justices Antonin Scalia and William Rehnquist, and not his own personal views. He again stated that Roe had been reaffirmed “many times.”

Brett Kavanaugh downplays a 2003 email on Roe v. Wade where he said he wasn’t sure all legal scholars refer to the case as “settled law”: “The broader point was simply that I think it was overstating something about legal scholars” pic.twitter.com/Au5Y9DtAap

Feinstein asks Kavanaugh about the Roe emails and "settled law."

Kavanaugh: "That draft letter was referring to the views of legal scholars … it was overstating something about legal scholars. I'm always concerned about accuracy … Roe v. Wade is an important precedent"

Other documents sent to the publication showed Kavanaugh’s questioning the use of “warrantless surveillance” after the Sept. 11 terrorist attacks, and criticizing the Department of Transportation’s affirmative action regulations.

Another email also showed Kavanaugh coaching an appeals court nominee to tell the Democratic senators she was meeting with to “say that she has a commitment to follow Supreme Court precedent…that she will adhere to statutory text, that she has no ideological agenda.”