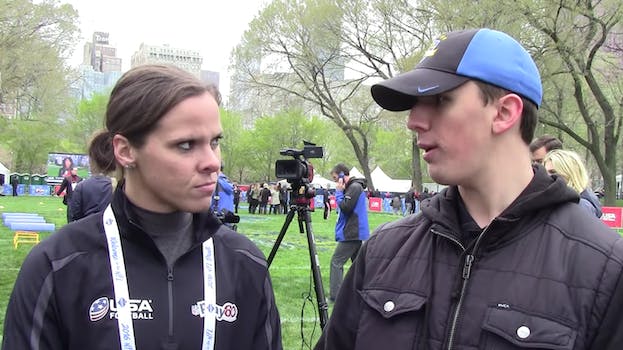 Katie Sowers is the first out lesbian coach in all of professional men's sports.

San Francisco 49ers coach Katie Sowers has quite a record in the NFL. She currently serves as the NFL’s second full-time female coach—and after publicly coming out this week, she will also be the league’s first openly LGBTQ coach.

Sowers came out as a lesbian in an extensive interview published by Outsports on Tuesday morning. Talking about her sexual orientation is important, she said, in order to create an environment inclusive for all LGBTQ people in the league.

“No matter what you do in life, one of the most important things is to be true to who you are,” Sowers told Outsports. “The more we can create an environment that welcomes all types of people, no matter their race, gender, sexual orientation, religion, the more we can help ease the pain and burden that many carry every day.”

Sowers pointed out there are “many people who identify as LGBT” in the league, but that many “do not feel comfortable” publicly talking about their sexuality in the NFL. Therefore, Sowers’ coming out is a major step forward for sports as a whole—she’s not just the first openly LGBTQ coach in the NFL, but also throughout all of men’s professional team sports. Not that these milestones don’t take away from her professional expertise.

“Katie is a baller, 100 percent,” 49ers receiver Marquise Goodwin told radio station KNBR. “She understands the game. She’s very familiar with the game. She played in a women’s league and it may be a little different, but she definitely has the attitude it takes to be in that room.”

Sowers said she’s been a huge football fan ever since she was a kid. As an adult, she played professional football for the Women’s Football Alliance and served for a time as general manager for the Kansas City Titans in the World Football Alliance before joining the Atlanta Falcons as an intern.

Not every sports fan, however, is on board with Sowers’ coming out. Many NFL fans were insistent that her coming out did warrant “news,” while others made misogynistic comments against her.

Others, of course, are excited about Sowers’ coming out, seeing it as an opportunity for both women and LGBTQ fans in the NFL to be seen and heard.

This is amazing! Great for her and the organization.

This is dope!! @49ers the world is changing for the better!!

pretty notable happening. not only is she a considerable gender minority in the industry but she feels comfortable to give this detail too

Sowers is also passionate the game’s female fans. After one young girl called out to Sowers during a preseason game, she came over and signed the girl’s 49ers flag.

Our daughter called out @KatieSowers @LevisStadium @49ers vs.the broncos game. Katie came right over and talked with her Signed our Flag pic.twitter.com/j1l7Dh9A6R

“I would have loved to see women in this role when I was growing up because I think it would have allowed me to follow my passion even earlier,” Sowers told Outsports. “If you can’t see something happen, sometimes it’s hard to believe it can. We don’t know what we don’t know, and I didn’t know football was even a possibility for women.”