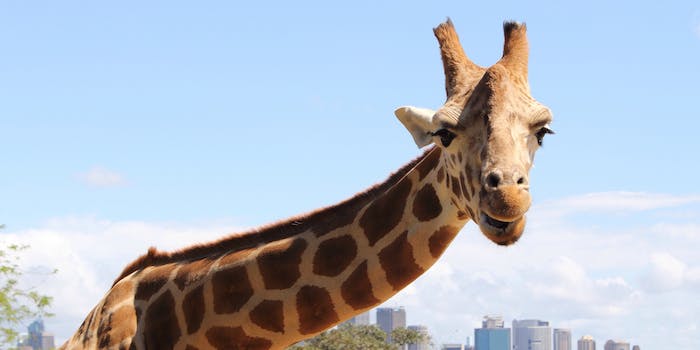 Photo via enjosmith/Flickr (CC BY SA 2.0)

We watched a giraffe give birth live and it was repulsive

Ah, the miracle of life.

Much like the KFC Double Down sandwich and wearing white at a wedding out of spite, there is nothing quite as gloriously repulsive and repulsively glorious as the miracle of birth. On a Friday night at 6:40pm ET, while others were celebrating the end of the work-week with a few brews, I witnessed this firsthand when I watched the much-anticipated birth of a giraffe baby on livecam.

We wrote up the impending labor of Katie the giraffe earlier this week. But it wasn’t until Friday evening that I received the following breathless exhortation in my inbox:

I have a saying: Don’t look a gift horse in the mouth. (Or a gift giraffe in the vagina, as the case may be.) Who was I to turn down this unique opportunity to watch a giraffe birth live? I decided to postpone my Friday evening plans and tune in to watch the miracle of life unfold.

5:40pm: I log onto the Animal Planet website to see a pair of hooves dangling from Katie’s vagina. It looks immensely painful, but her face is placid, barely registering the demon hell party that must be raging in her groin.

5:42pm: Hooves are still dangling in mid-air, causing me to flash back to the longest poop I’ve ever taken. A pang of inter-species sympathy for Katie flashes in my heart. 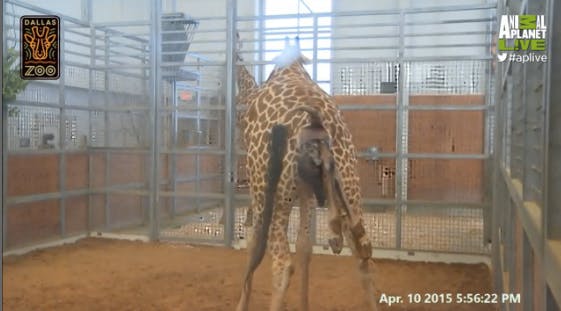 5:45pm: Unlike Beyoncé, who notoriously rented out an entire wing of a hospital to give birth to Blue Ivy, Katie does not have a private stall. So the other giraffes are periodically craning their neck to see the action in the stall over, like “Hey, when are you shitting that thing out already.” It feels kind of intrusive, but then, so is the ultra-voyeuristic celebrity-obsessed culture that continues to speculate on Blue Ivy’s parentage. #commentary. 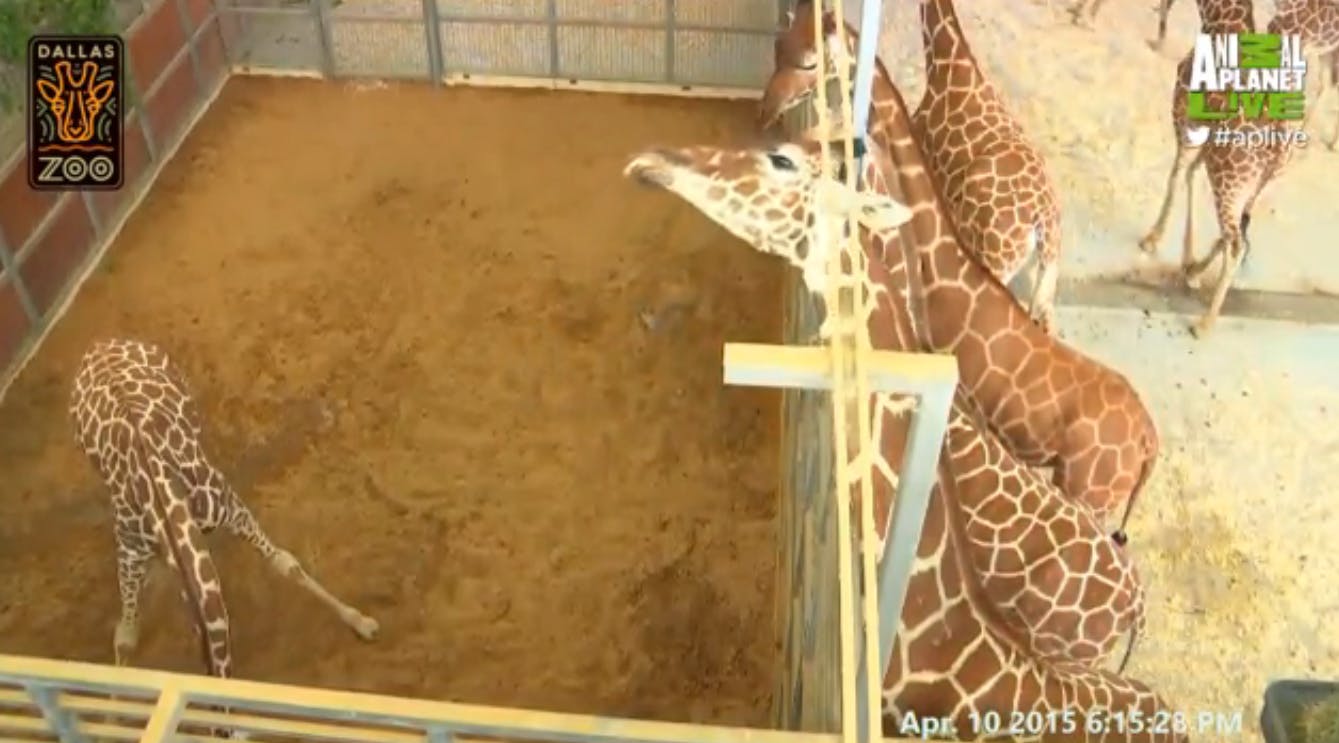 5:51pm: An aerial shot shows that the hooves are still dangling. This is gonna be a long night.

5:53pm: The hooves are now accompanied by a vaguely ominous-looking brown streak that could either be the baby’s tail or poop. I hope it’s the latter. Otherwise, the approximately nine dozen times I’ve looked up “does every woman poop while giving birth” or “pooping while giving birth” in Yahoo Answers would be for naught. I am very interested in things that come out of butts and vaginas. I am also emotionally 7 years old.

5:55pm: After a few minutes of giving birth, Katie finally squats and sits down. “You’re all right, you’re all right, sweetie,” I hear a disembodied voice say. “Stand by, stand by!” another says. It sounds like they’re narrating a missile launch, which I guess this kinda is.

5:56pm: The narration from the Dallas Zoo kicks in. Apparently, Katie was pregnant for 15 months and the first signs of labor happened at 5:04pm CT, so she’s been in labor for about 50 minutes. Katie starts pushing harder.

6:00pm: The baby will fall 6 feet to the ground, “which can be a little alarming if you’re not prepared for it, but is totally natural for a giraffe.” The baby will be 6 feet tall once it is born, and it will weigh about 120 to 150 pounds, which, if the giraffe were a white female who lost about 20 pounds, would immediately qualify it to be on the cover of most American fashion magazines. #commentary but also #sadbuttrue.

6:01pm: Katie has just pooped out a baby, which is now lying on the floor inert in a pool of red slime. Katie looks non-plussed, and yes, I am using that word with the correct usage.

6:03pm: The annoucner says Katie is exhausted, but she doesn’t look it; she looks like she could down a couple of kale smoothies and do plyometrics on P90X. Nature is tough as shit.

Photo via enjosmith/Flickr (CC BY SA 2.0)