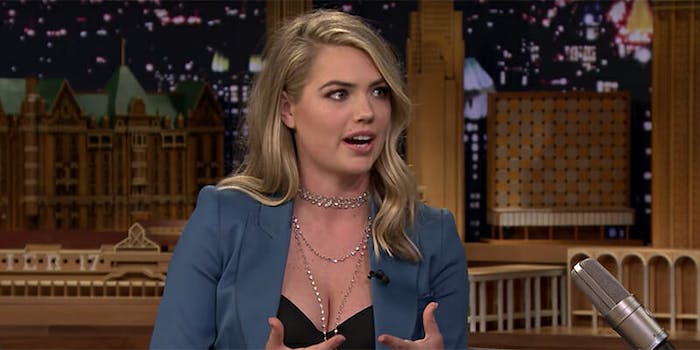 A week after she tweeted “#MeToo,” model and actress Kate Upton described the acts of sexual harassment and sexual assault that she says were conducted against her by Paul Marciano, co-founder of the clothing brand Guess.

Upton detailed the allegations in an interview with Time magazine published on Wednesday. She said Marciano assaulted her and began harassing her during her first professional modeling campaign when she was 18.

“Paul came straight up to me, forcibly grabbed my breasts and started feeling them—playing with them actually. After I pushed him away, he said, ‘I’m making sure they’re real,'” Upton said. “Despite doing everything I could physically do to avoid his touch throughout the meeting, he continued to touch me in a very dominating and aggressive way, grabbing my thighs, my arms to pull me closer, my shoulders to pull me closer, my neck, my breasts, and smelling me.”

Marciano reportedly told TIME in a statement that Upton’s accusations are “absolutely false” and “preposterous.”

“I have never been alone with Kate Upton,” Marciano said. “I have never touched her inappropriately. Nor would I ever refer to a Guess model in such a derogatory manner.”

According to TIME, photographer Yu Tsai says he witnessed the incident Upton describes and corroborated details.

Upton said during the same initial meeting with Marciano, he “forcibly grabbed” her head and kissed her face and neck.

After having to “wiggle away” to avoid his advances, Upton said she declined to let Marciano walk her up to her hotel room. She said she was fired from the shoot the next day.

Upton continued working with Guess, but she said Marciano would text her “constantly” leading up to photo shoots and that she felt if she stopped communicating with him, she would lose bookings. She also said Tsai was fired “in what seemed to be retaliation” for one time bringing her boyfriend to set.

“It was an emotional and non-stop battle of games, power struggles, and creative avoidance tactics,” Upton said.

Upton initially came forward about Marciano in a tweet on Jan. 31, writing it was “disappointing that such an iconic women’s brand @GUESS is still empowering Paul Marciano as their creative director.”