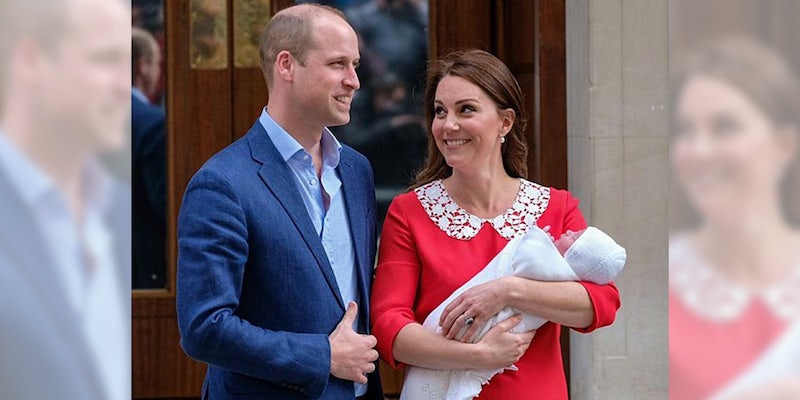 Posing with a gracious smile and a blowout is a lot to ask hours after giving birth.

I’ve been thinking a lot about Kate Middleton this week, a thing that happens next to never. Because I am susceptible to the appeal of a corgi entourage, I do sustain an avid interest in The Crown, but my knowledge of the modern Royal Family usually begins and ends there.

Except when they welcome a tiny heir. Then, the entire world—including me—takes note.

As the Duke and Duchess of Cambridge emerged from London’s  St. Mary’s Hospital yesterday, Kate Middleton’s eight-plus-pound bundle of joy grabbed perhaps less attention than the new mom herself. A mere seven hours after pushing this latest prince out of her body, the Duchess stood before a sea of flashing cameras with perfectly applied makeup, her signature blow-out looking just as signature as ever, her feet in heeled pumps, and a regal serenity that’s tough to square with the bloody, loud, and painful process of childbirth.

Given her status as partner to her country’s future king, anything less than the public appearance Middleton delivered yesterday would probably be unacceptable. Still, the only relatable thing to come out of yesterday’s Royal Birthing newscycle were these homemade memes:

kate middleton a few hours after pushing out an entire human v. me debating whether i should get up and go to the bathroom or just wet the bed pic.twitter.com/1HNPPwfZ1U

Kate Middleton a day after giving birth vs. me an hour after kindergarten drop off pic.twitter.com/32luLcqQmr

Royal mothers—at least, England’s royal mothers—labor under the expectation that they’ll leave the hospital looking flawless: See Princess Diana’s postpartum looks for evidence. Indeed, after her two previous births, Middleton has always presented looking similarly put together, if not in so short a time as she did Monday.

People reports that Middleton’s “effortless” appearance demands the intensive efforts of a whole team of people: Her personal stylist packs pre-arranged outfits; her hairdresser gets in there with her full arsenal of combs; there’s probably also a celebrity makeup artist on call, along with assistants and advisers and Prince William in the room for support. Although Middleton’s hospital stays have become shorter with every birth—overnight for Prince George; 10 hours of Princess Charlotte; and now seven hours for the as-yet-unnamed boy she debuted yesterday—her desire to make a speedy exit also has something to do with the overwhelming fanfare she and her husband generate wherever they go. According to People, royal watchers spent weeks staking out the hospital before the actual birth took place: In an effort to spare her fellow moms the noise and hubbub, Middleton apparently wanted to bow out as quickly as she could so that the birthing environment could regain some semblance of calm.

This in-and-out hospital experience is apparently also the norm for fellow wealthy U.K. moms, as Bustle reports. It’s a phenomenon we can chalk up to generally better health and, particularly in Middleton’s case, the efficiency money and a title can provoke. She is more or less guaranteed to have her every conceivable wish fulfilled once she returns home to Kensington Palace, making for a medically stable (and private) recovery period.

None of this comes as any degree of surprise, of course, and I for one have been pleased to see a kind of uniform agreement on the fact that Middleton’s quick turnaround, while unusual and impressive, is in zero ways realistic for the rest of us. Regardless, though, it’s a reminder of the wild standards we set for new moms.

Here’s what we know about Middleton’s pregnancies: Each one has been heralded by hyperemesis gravidarum, a rare form of extreme morning sickness characterized by nausea, vomiting, and weight loss so intense, it can (and does) send sufferers to the hospital. Like so many pregnancy-associated misfortunes—miscarriage leaps to mind—this condition often goes undiscussed, probably because it affects only 1 percent to 3 percent of pregnant people (although many expectant parents won’t necessarily know they’re experiencing it), and probably also because society holds unreasonably rosy expectations for moms-to-be. But who is actually the picture of glowing contentment in the aftermath of childbirth?

A baby every two years. Morning sickness so severe it sends you to the hospital each time. I know her life is hardly pitiable, but it makes you think about how we still exploit women's bodies.

As outlined in a recent Washington Post op-ed, many people who’ve just given birth will have a hard time standing and walking for a bit. This makes sense: Your body has been stretched to an incredible capacity; in many instances, your vagina will have been partially sewn back together; there will likely be some continued bleeding. About one in seven women will also experience postpartum depression after birth, another thing that goes unmentioned because, as writer Danielle Campoamor explained in an essay for parenting site Romper, there’s a certain sense of shame, of loneliness, of stress, and of fear that comes with feeling like you’re somehow not doing motherhood right.

I’m not about to tell the Duchess of Cambridge she’s doing it wrong, nor am I here to suggest she’s secretly living with postpartum depression. I am legitimately impressed that she finds both the physical strength and the patience to weather a short standing tour and smile kindly through what I imagine is deep exhaustion—although if my binge-watching has taught me anything, it’s that the majority of royal life is spent literally grinning and bearing minor to major upsets.

Rather, watching all the commentary pour in about Middleton’s incredible composure; about the status of her uterus as “public property”; about this latest reality check that royals are extremely unlike us, I am thinking about the untenable level of scrutiny women occupying every social stratum endure when it comes to rearing their offspring, and how strange it must feel to have a world of eyes watching your womb for nine months, judging your every move. We expect the world of women, especially those in public positions to be always on the ball, always perfectly styled, always smiling through the shitstorm. We expect them to always be gracious enough to hurry themselves out of the hospital because other people are nosy monsters who can’t control their collective urge to pry.

More than anything, Middleton’s flawless face reminds me of that socially imposed obligation to do it all, to be both unattainably perfect and perfectly relatable. And that just feels like a trap.