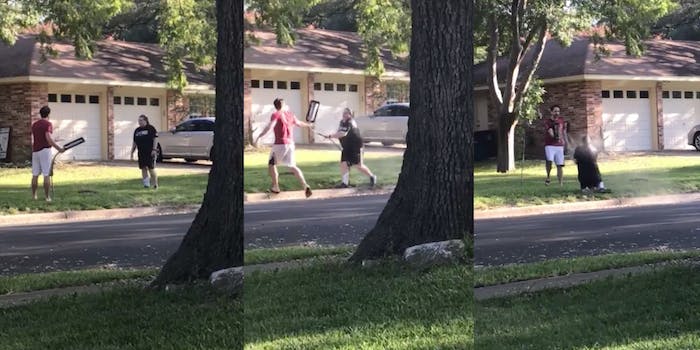 The video inspired the creation of a new subreddit, r/GardenHoseJustice.

A viral Reddit video offers a simple solution for an unwanted Karen on your lawn: water.

Thankfully, most homeowners already possess the necessary tools to de-Karen their property. Just scoop up your garden hose—don’t worry, the sprinkler can remain attached—and go to town on any rude, entitled, unwelcome visitors.

That’s exactly what the hero of a recent video did when an unwelcome Karen reacted negatively to his Black Lives Matter sign. The video shot to virality hours after appearing on the r/PublicFreakout subreddit on Monday night, earning roughly 75,000 upvotes in 16 hours.

According to the video’s poster, the protagonist of the glorious 50-second clip is a neighbor. Before the video began, an anonymous Karen, apparently triggered by a Black Lives Matter lawn sign, parked in the middle of the street and shouted “White lives matter” at the top of her lungs for half an hour.

Honestly, these neighbors showed remarkable patience. But that patience eventually ran out. As the clip begins, a man in a red t-shirt and white shorts can be seen wielding a sprinkler still attached to a running garden hose. He appears to be engaged in conversation with a woman dressed in a dark shirt and shorts.

Karen enters the frame soon after the video begins, apparently midway through an argument with the homeowner. Their conversation is inaudible, but it apparently doesn’t go favorably, as Karen soon earns the sprinkler-wielding man’s wrath.

The man turns the sprinkler on Karen, soaking her upper half. She charges the man as soon as he begins dousing her but finds herself thoroughly lacking in the altercation. The homeowner sidesteps Karen’s lunge and continues drenching his opponent.

Karen’s attempt to grab the hose lands her on the ground, and the man in red continues to douse her from head to toe. Karen tries again to seize the hose to no avail, engaging in a Benny Hill-esque struggle. She eventually lays hands on the hose but lacks the strength to pull it from its owner’s grasp.

Soon, Karen finds herself back on the ground, fruitlessly trying to wrench the hose from the man in red’s hands, all while the neighbor filming giggles in the background.

Karen continues flailing on the ground as the man in red tells her to “please get off my property,” hose still aimed squarely in her direction. As the video concludes, the woman filming offers to call 911 for her neighbor.

Commenters were delighted by the video, with several noting that they’d never seen such a glorious display of human vs. sprinkler combat. This prompted users to share a litany of other examples of when a hose has been used to effectively de-Karen a property.

The discourse eventually led to the creation of r/GardenHoseJustice, where similarly satisfying videos are beginning to compile. The subreddit has already accumulated nearly 300 followers.