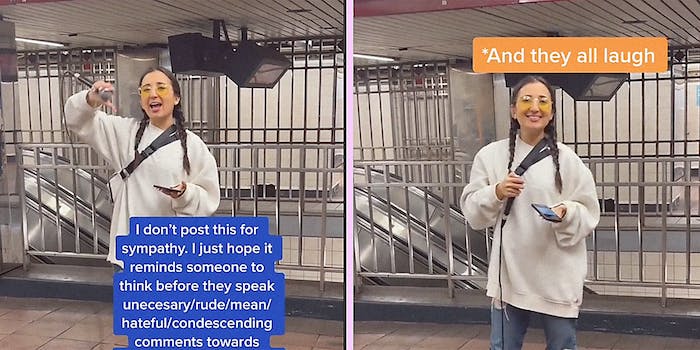 A viral TikTok shows a “Karen” trying out a new profession—music critic—as she ruthlessly disses a subway performer’s voice and tells her not to sing anymore.

The video, uploaded over the weekend by singer Nahscha (@nahscha_), has already earned more than 7.5 million views and won her waves of support from viewers. Nahscha performs regularly in New York subway stations, and her videos routinely earn hundreds of thousands of views, but this is her most popular post yet.

In the video, Nahscha is in the middle of one of her regular performances. She turns around to look at the critical Karen, who is beckoning for her as she rides a descending escalator.

“Your voice is like eh,” Karen says as she flashes a thumbs-down. “Don’t sing anymore.”

Nahscha takes the unprompted criticism in stride, thanking Karen and smiling sheepishly as other passersby laugh.

In the text overlaying her video, Nahscha writes, “I don’t post this for sympathy. I just hope it reminds someone to think before they speak unecessary [sic]/rude/hateful/condescending comments towards others. You never know what people are going through. Please do your best to radiate positive energy and be kind. Karma is real and nobody likes a bully.”

It takes a bold person to go out of their way to publicly insult a street performer when you could just as easily ignore them and keep your opinion to yourself. But here’s the real zinger: Nahscha is an objectively great singer. In the past week, she’s posted excellent renditions of recent hits by Dua Lipa, Justin Bieber, and Ariana Grande. These are ambitious covers, and Nahscha nails all of them, with her videos earning hundreds of thousands of views and glowing praise from strangers.

Those strangers hyped up Nahscha in the comments below her latest post, defending her against Karen’s undue criticism.

“I don’t understand people’s need to be so mean to someone they’ve never met,” @ahini120 wrote. “I completely admire you for continuing to sing! I love your voice!”

“Their life must be that miserable you have a gift don’t stop sharing with the world,” @commenting2u added.

The viral success and positive feedback on Nahscha’s video almost certainly outweigh Karen’s harsh words. That virality might also translate into greater success for Nahscha’s own music. The singer has one song titled “The Lottery” available to stream on Spotify; it’s earned just over 52,000 streams since December, and that number may very well jump in the wake of her viral TikTok.

To paraphrase playwright George Bernard: “Those who can, do; those who can’t, Karen.”