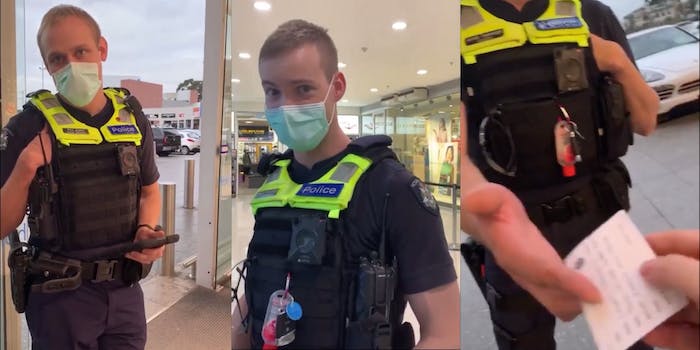 A woman in Melbourne, Australia, threatened to sue officers after they stopped her on Saturday for not wearing a mask, News.com.au reports. The woman has been dubbed a Karen.

The woman, whose identity remains unknown, posted a series of videos of police stopping her and a man for not wearing masks in public.

The post, which has since been deleted, included the caption, “NO MASK LOL!!! KNOW YOUR RIGHTS!!! I DO NOT CONSENT!!!!!”

“Clearly these Police Officers don’t know what they are talking about,” the post said. “My lawsuit WILL be taken all the way to a proper common-law where ENOUGH IS ENOUGH!!!!!”

The video, which was uploaded to the r/PublicFreakout subreddit, shows the two officers stopping the man and woman and asking for their identification.

“I’m not required to give you anything,” she says. “Have I committed a crime?”

The woman laughs and says, “We’re not prepared to give you I.D.”

“We’re gonna have to place you under arrest if you don’t give us I.D.,” one of the officers says.

She then asks for their names, their “details” in writing, their numbers, and their place of work.

One of the officers explains to her that she is subject to a $200 fine for not wearing a mask in public. She says she “does not consent to wearing a mask.”

“If you do arrest us, we will be suing you for kidnapping,” she says. One of the officers says that because she committed an offense, she is required by law to give them her information.

The officer tells them they are both under arrest and that the officers will confirm their identities at the police station. The woman says she “does not consent to be taken anywhere.”

As the officer re-explains the mask and I.D. requirement, individuals can be seen walking behind the officers wearing masks as they enter the building.

“Your job is to make sure that we are safe,” the woman says. “And I can see you’re carrying guns, both of you, so now I’m fearing for my life.”

The woman says she will be suing both of the officers $60,000 each and the man with her will also sue both officers for $60,000 each. She asks the officers if they would like to continue and they simultaneously say “yes.”

The Victoria Police, which did not immediately respond to the Daily Dot’s request for comment, posted on Twitter that officers “will not hesitate to issue $200 fines to people who are obviously and blatantly failing to wear a face covering without a valid reason, such as a medical condition.”

“Police also have the power to arrest people who choose not to wear face coverings,” the department tweeted. “And subsequently fail to comply with a police directive to provide proof of identity.”

One person commented on the Twitter thread and called the officers “under-qualified” to discuss health concerns. Another suggested making the fine $1,000.