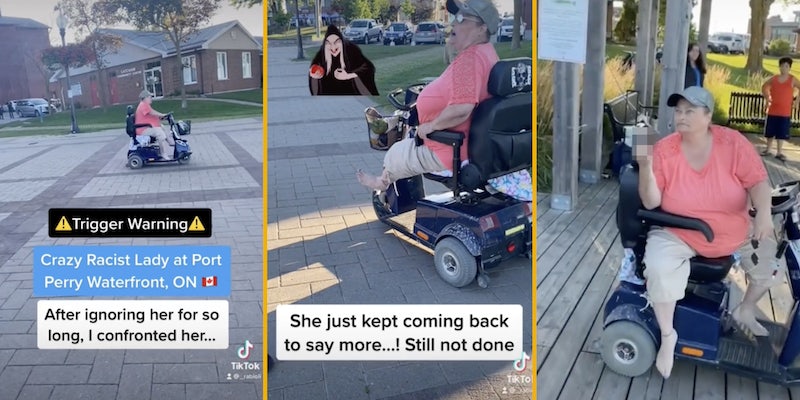 ‘I’m a racist b*tch, and I love it!’: Karen on mobility scooter tells Pakistani family they smell like curry in viral TikTok

A racist Karen on a mobility scooter went on a tirade against a family in Ontario, and after the TikTok a family member recorded to document it, the Karen was reportedly arrested.

The video, which the caption notes is “for awareness purposes only,” was posted to the @_rabioli account, garnering nearly 9 million views since going up on the platform Aug. 17. It documents the racist ranting of what the creator labeled a “crazy lady at Port Perry Waterfront” in the Canadian province, creating a scene with her tirade against a family just trying to enjoy a day outdoors.

The video starts with the creator, who says in their bio they are Pakistani, yelling, “You want to say it to my face?” to the Karen as she starts to move away. The on-screen caption on the video, “After ignoring her for so long, I confronted her,” indicates that the abuse had been happening for a while before the creator began documenting it.

The Karen says, “Yeah, I’ll f*cking say it to your face, you f*cking ugly Paki fuck. Get out of my town!”

The creator’s companion and the Karen then have an exchange, which includes the companion calling her a “f*cking racist b*tch,” to which she responds, “Yeah, I’m a racist b*tch, and I love it!”

She then comes back to confront the family further, which includes the Karen accusing them of smelling bad and the companion making a crack about the Karen’s feet. That brought a surprising observation: “Yeah, you know what, I’m a witch! We’re supposed to be drowned, you dumb f*ck. You know nothing about witches! You want to fuck with me? You’ll see what happens.”

She moves away again at this point, but then, after she’s at a distance, brings up curry and spices. She also disparages their language as “disgusting.”

The video eventually crescendos into a scene in which multiple people gather around her to try to get her to calm down or leave the public place entirely. The Karen, however, continues to rant about being home when told to go home, asserting that she—and not the family—deserve to be in Canada.

“You’re a total embarrassment,” a bystander told her. “You’re making a scene in front of all these young children for nothing.”

Commenters concurred, with one apparent witches’ representative noting, “The witches do not claim her.”

The TikToker also added some followup footage, gathering nearly a million views, which shows the crowd continuing to disapprove while she defiantly holds up double middle fingers to express herself.

As the TikToker revealed in a subsequent video, Durham Regional Police shared via its Twitter account that “a 61-year-old female has been charged with causing a disturbance at the waterfront in Port Perry. A video emerged on social media depicting the female suspect yelling racial slurs at several victims.”

The Daily Dot has reached out to Durham Regional Police for comment.