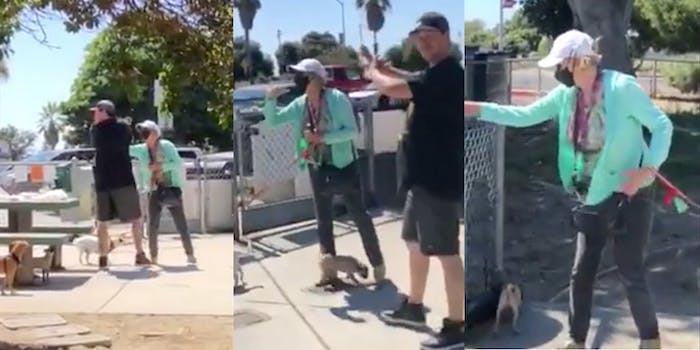 A new type of Karen emerges.

A San Diego woman has been dubbed a “Karen” by the internet after a video showed her allegedly Macing a couple at the dog park for not wearing masks.

Men can be Karens, too, though efforts to dub them with a similar catch-all banner like “Ken” haven’t stuck. Critics say the term Karen marginalizes innocent IRL Karens and sanitizes racist, abusive behavior.

But this California Karen is different.

Until last week, President Donald Trump’s non-committal tone toward masks in the U.S. pandemic response politicized masks among his supporters. Conservatives pushed back on calls for national mask mandates, and fringe right-wingers said masks were part of a larger conspiracy by the government to crackdown on civil liberties.

But this Karen is staunchly pro-mask, signifying a broader American consensus since the president began publicly wearing a mask last week. Whatever their personal politics, in late July 2020, even the viral Karens agree that masks are important.

The injured couple, Ash O’Brien and Jarrett Kelley, told a local ABC affiliate that the Karen in San Diego’s Dusty Rhodes Dog Park complained that they were maskless and violating a no-food policy. She then allegedly left and returned with Mace.

“She just came up without saying anything and just stuck the Mace can right in front of my face,” O’Brien told 10 News. “My husband, being a good guy, walked in front of her and was like, ‘Hey, calm down please don’t do this’—and then she grabbed him and just starting Macing him. She used the entire can on him.”

The confrontation was filmed by an onlooker. As of Monday afternoon, the video was trending on Reddit’s “FuckYouKaren” forum.

The couple has filed a police report, alleging battery, according to the New York Post.