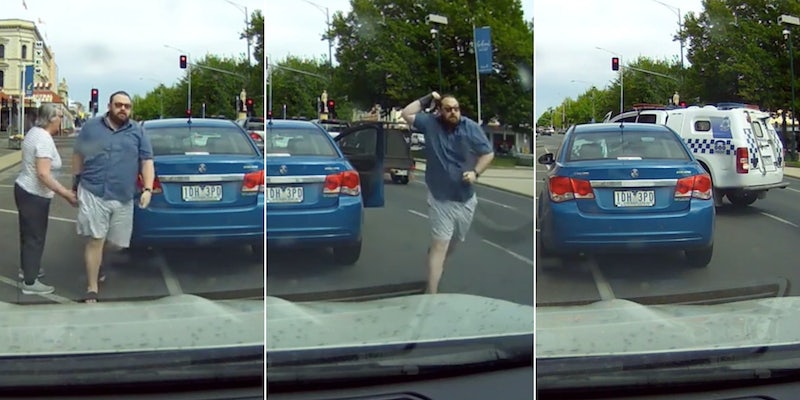 The woman captured the whole thing on her dashboard camera.

A viral Reddit video shows “Karen and Ken” charging a woman after hitting her car, then being thwarted by cops as they try to flee the scene.

The accident took place in Ballarat, a city in Victoria, Australia, according to the Daily Mail. The victimized woman documented the altercation with her dashboard camera. The footage was uploaded to the r/PublicFreakout subreddit on Friday morning, where it has already received more than 4,000 upvotes.

The dashboard camera video shows the woman driving down the road as a blue car to her right veers into her lane. As the woman drives through the intersection, the other car continues drifting into her lane and hits her; at no point does the driver of the blue car appear to attempt to correct its course.

Following the collision, the blue car speeds through the intersection and parks in front of the woman. Karen and Ken both emerge from the vehicle, and as Karen looks at her car in dismay, Ken begins yelling at the out-of-frame woman.

Ken’s words are inaudible, but he’s apparently trying to blame the woman for the accident, despite being clearly in the wrong. He points aggressively at the woman, and she responds, “Are you kidding me?”

The woman steps into frame and takes out her phone to snap a picture of the couple’s license plate. At the sight of her cell phone, Ken goes berserk. He charges the woman with his fist raised and screams at her to “delete the fucking photo,” to which the woman responds, “You hit my car!”

Amid the confrontation, sirens can be heard in the background. As they notice the cops approaching, Karen and Ken suddenly drop the argument and waddle back to their car. Before they can flee the scene, two police cars block them in on the side of the road.

The video ends there, and it’s unclear how the cops resolved the altercation. Nevertheless, Redditors delighted in the “instant karma” that Karen and Ken received and mocked Ken’s pathetic attempt to attack the woman.

“Haha I like how he tries to take a swing,” u/mrdiego71 commented. “If my wrist didn’t hurt from playing runescape in my mom’s basement!”

Others mused on how American police would have handled the altercation differently.

Redditor u/22-tigers wrote, “Australia not America, the tension would have de-escalated fairly quickly and no one would be shot tazed [sic] or choked by the police.”