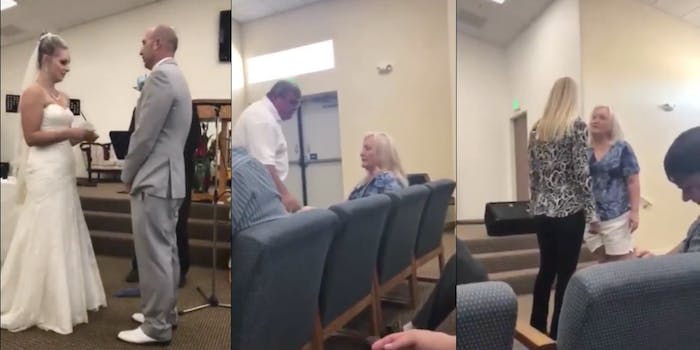 'My sister is fine and happily married. The MIL is no longer in contact.'

A viral TikTok shows a mother-in-law yelling at her son’s bride during their wedding for saying he had flaws, the Scottish Sun first reported. Reddit users dubbed the mother-in-law a Karen.

The TikTok, which has since been deleted, was originally posted by the bride’s sister, Sarah Ragsdale. She captioned the video, “My sisters wedding a few years ago. Her MIL has always hated her. She’s just ones of those MIL’s that feel my sister is taking her son away,” per the Scottish Sun.

The first video begins with the bride and groom standing at the altar saying their vows, when the groom’s mother stands and yells at the bride for saying her son has flaws.

“You’re not going to say my son has flaws,” the mother says.

The bride replies by telling the groom’s mother that she can leave, adding, “You’re not going to ruin my wedding.”

“Everybody has flaws, and that’s why I love him,” the bride says. “You can leave, Judie.”

Others can be heard saying, “you can leave.” The bride adds, “You can get out of my wedding now.”

The groom’s mother says she is not leaving, adding “That dress you’re wearing I paid for.”

The mother-in-law says, “I don’t want to hear any flaws about my son.”

The groom says to his mother, “You have the flaws right now, because you don’t know how to act like an adult.”

The woman who approached the mother-in-law earlier in the video says, “She’s in love with your son, accept it.”

At the end of the video, the bride grabs the groom’s hands and speaks to him directly.

Ragsdale wrote in a TikTok comment that her sister’s mother-in-law has always had issues with her sister.

“He is in contact with his mom but his mom has always had an issue with my sister,” she wrote.

In another TikTok comment, she said she deleted the video because her sister’s mother-in-law received death threats as the video caught more attention.

“My sister is fine & happily married,” Ragsdale commented. “The MIL is no longer in contact.”

Ragsdale replied to another comment, saying her brother-in-law is not “spineless.”

“He wasn’t going to make his wedding worse,” she commented. “He told her to be quiet as soon as she spoke & told her not to ruin the wedding.”

One Twitter user said they “feel bad for the guy.” Another said the mother should “cut the umbilical cord.”

Ragsdale wrote that the two are still “happily married” and have a baby together.

“Even through all the bs, they still try to contact his mom,” Ragsdale commented. “But she wants no part of it.”