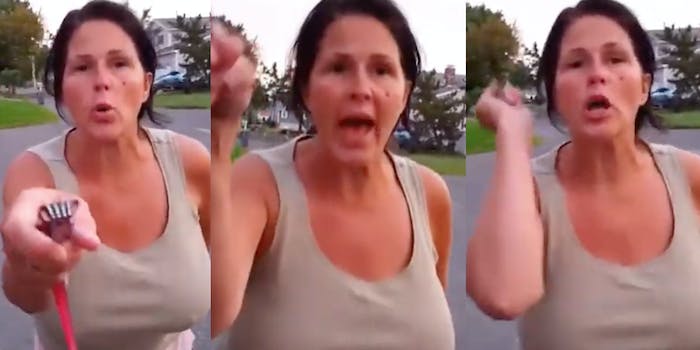 ‘Karen’ proudly doxes herself while being filmed harassing a Hispanic man

He was just trying to take sunset photos with his dogs.

A New Jersey woman was recorded berating a Hispanic man who was just trying to take a picture of the sunset with his dogs. And in a refreshing twist on Karen videos, she says her name, address, and gives the recorder permission to post the video online.

Ruben Martinez, the man she berated, filmed the encounter and posted it to social media.

Martinez said he was trying to take a photo of the sunset when the woman began to harass him and ask him to leave the neighborhood. He captioned the video, “I was simply trying to shoot the sunset at 7 Bridges Road when I was met with racism.”

He drove to a dead-end street in Oceanport with his two small dogs. As they were driving down the street, he explained, the dogs began barking at another dog they had seen. He left the dogs in the car to take a picture for what he claims was less than two minutes when the woman approached him and allegedly told him to go back to where he came from.

The woman and Martinez yell over each other at the beginning of the video. She tells Martinez and his “loud dogs” to leave the neighborhood. “They’re small dogs,” he responds.

“I don’t care. They’re disrupting the entire neighborhood,” the woman, who identifies herself as Rita Masterson, shoots back.

Martinez then asks the woman to identify herself, and she says her name as well as her address. She also gives him permission to post the video to social media. “Absolutely!” Masterson exclaims.