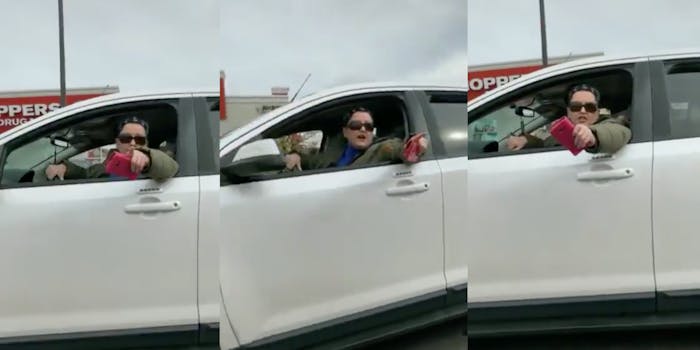 'I could f*cking cream all of you even with all my nerve pain.'

Remember the good old days, when people had self-control? They’re apparently long gone, as demonstrated by a video recently uploaded to the r/PublicFreakout subreddit, which shows a Karen chasing a group of teenagers in her car and hurling profanities at them after they criticized her for parking in a handicap spot without a placard.

TikToker @maddswinterburn originally uploaded the video but has since removed it from her page. Thankfully, someone snatched it up and added it to Reddit, where it can live forever alongside all its cursed Karen brethren.

Several Redditors guessed, based on Karen’s license plates, that the incident occurred in Ontario, Canada. Before the video began, the teens filming apparently criticized Karen for parking in a handicap spot. This enraged her enough to pursue the other car and launch into a diatribe against the teens.

“You little fucking cunt,” Karen yells, erasing any chance she had of being perceived as a rational human. “You think you can talk to people like that and get away with it, you little bitches?”

Karen claims that she has severe nerve pain, a legitimate and often debilitating health issue. People with several underlying causes of nerve pain, like neuropathy, can be eligible for disability. Invisible disabilities are very real, and it is entirely possible that Karen merely left her placard at home.

Even assuming Karen is telling the truth, however, it doesn’t excuse her behavior or language.

“I have severe nerve pain and I hope it happens to you someday, you little bitches,” she says. “I could fucking cream all of you even with all my nerve pain.”

The two cars appear to be stopped in the middle of a city street as the conversation—if you can call it that—proceeds.

“You fat fucking bitch,” Karen continues her rant. “Yeah, you. You’re fucking fat. And you’re a fucking ugly little fucking mutt, and you have a big fucking nose.”

These words close out the video, as the teens giggle and drive away from the rage-absorbed Karen. Commenters dragged the unidentified Karen for her choice of threats and insults.

“This is the female version of the guy who ‘will beat your dick to the ground,'” one commenter wrote.

When other commenters questioned the motivation behind Karen’s unhinged behavior, one user summed it up perfectly: “Self righteous, self important, self centered. Not a mental illness, some people just feel entitled.”