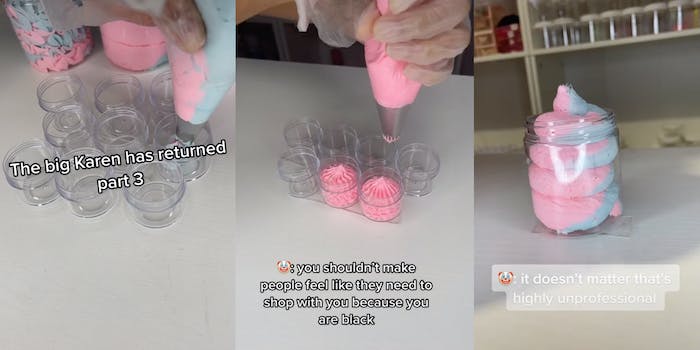 ‘So you really going to post me on your TikTok’: Cosmetics influencer exposes salty DMs from Karen customer

'The audacity of people.'

A cosmetics influencer is going viral on TikTok for putting her Karen customers on blast in a series of videos.

TikTok’s @shiniquekosmetics, an account dedicated to a skincare and body therapy brand of the same name, has been using the platform to expose Karen customers for weeks. In that time, she has built up a solid backlog of irritable Karens and irate customers who absolutely refuse to learn what body butter is.

For the uninformed, body butter is a creamy and butter-like moisturizer that is absolutely and unequivocally not edible. It might have butter in the name, but that is only a descriptor for the product’s thick and creamy consistency.

Despite this, a truly shocking number of the customers @shiniquekosmetics provides service to seem to be determined to put her products in their mouths. Some of the messages she’s received from customers, which she has since turned into viral content, are obvious trolls, but some seem to be genuinely confused consumers. All this despite the disclaimers she puts on her products, which spell out their intended use.

Some of @shiniquekosmetics’ best videos veer away from body butter tasters and into genuine Karenhood, with several of her uploads detailing her conversations with irritating, entitled, or downright rude customers.

Each of her videos sees @shiniquekosmetics “dealing with Karens” as she fills small glass jars with colorful body butter. If the viral Karen content weren’t included, the relaxing videos could qualify as ASMR, thanks to the delightfully calming visuals and quiet, hypnotic sounds.

Instead, the videos are all soundtracked by recreations of the beauty brand owner’s conversations with difficult customers. One of the Karen videos, which has earned more than 2 million views in the week its been up, reenacts a conversation between the owner and a Karen who insisted that she stop calling her customers “babe.”

Using one of TikTok’s text-to-speech voices, @shiniquekosmetics shares the conversation over a video of her filling a jar with pastel pink and blue body butter. Despite explaining that she calls her customers babe as a shorter form of “ShiniqueBabes,” the Karen customer was having none of it. She responds that this simple decision is “highly unprofessional,” a notion that commenters found laughable. A number of viewers pointed out, via the comment section, that not all businesses need to follow the same rules of professionalism.

In one of her most popular video series, @shiniquekosmetics details a recurring conversation they’ve been mired in with “big Karen.” Between the three parts that have hit her page so far, the videos have collected more than 2 million views.

The first part of the big Karen trio saga begins with a message from the customer, proclaiming that the brand owner thinks people “should support your business just b/c its Black owned.” In response, @shiniquekosmetics responded that she “doesn’t see color” and is simply thrilled that she has the chance to follow her dreams and watch her business “grow daily.”

This straightforward and polite response was not what the Karen was looking for, apparently, because she fired back a message claiming that @shiniquekosmetics thinks she is “better than anybody else.”

In part 2, the conversation continues. The customer expands on their assumptions about @shiniquekosmetics, claiming that she “shouldn’t make people feel like they need to shop with you because you are Black.” When the brand owner realizes that the discussion isn’t going anywhere, she responds that she is going to “respectfully exit this conversation,” an act that the Karen finds utterly unforgivable. She claims that the cosmetic line is headed “nowhere” thanks to its owner’s refusal to verbally spar with rude customers.

A final upload to the “big Karen” saga sees Karen discover that her rude comments have made it to TikTok. The video quickly dives into a “salty DM” the owner received from the irate customer. Karen notes that she discovered the brand’s TikToks, and claims that including her comments in them amounts to “bullying.”

When she didn’t get the response she wanted, Karen recruited her minions to likewise spam @shiniquekosmetics with angry messages. Another video sees the creator detail some of these, like the commenter who claimed that “exposing” people online “is called cyber bullying,” despite the fact that she didn’t actually expose the Karen by name.

It seems, based on the numerous “bitter Betty” and “Karen” videos on @shiniquekosmetics’ page, that far too many people have an excess of time on their hands. Would-be customers seem to delight in trolling the small, independent business with odd complaints, like that it isn’t the first beauty brand to exist on the market. It seems like, more than anything, people are just looking for things to complain about, regardless of how it affects others.

Thankfully, all the unprompted hate doesn’t seem to be slowing @shiniquekosmetics down. Fresh videos typically hit the TikTok page every day, with some days seeing two or three videos within hours of each other. The brand is also looking for fresh content ideas, which likely means that soothing body butter ASMR is right around the corner.

The Daily Dot reached out to @shiniquekosmetics via Instagram.