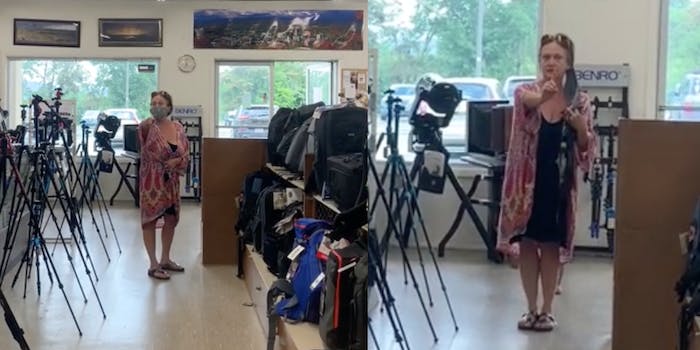 A veritable army of Kens and Karens has been forming over the last several months. Yet another woman joined their ranks today, following an incident at Ball Photo Shop in Asheville, North Carolina.

A video of the woman rose to the top of the r/PublicFreakouts subreddit. The post said that prior to the video starting, the woman “caused a scene because her kid was not allowed in a shop without a mask.”

The woman is already irate when the video begins. She is in the midst of telling the man behind the camera that he is breaking the law by filming her. The law in North Carolina appears to allow filming in public spaces. Still, the man filming asks someone identified as the shop owner if he is allowed to film in the space. The owner’s answer can’t be heard, but moments later, the man behind the camera confirms that he has permission to film.

“So you’re videotaping me without my authorization, and you just told me to ‘fuck off,'” the woman says directly into the camera. Cementing herself in Karen status, she immediately asks the employee to phone the police. When he doesn’t promptly comply, she storms to her vehicle to fetch her own phone.

While she is in her car, the man behind the camera apologizes to the owner. He offers to leave, but the woman reemerges before he has the chance. “As a photographer, I can tell you you’re not supposed to be videotaping me,” she says. “I know the law. And I’ll also tell them you’re aggressive. You wanna get arrested?”

The woman sticks to her guns and phones the police. Her explanation of the situation does not appear to qualify as a crime. “A man told me to fuck off in front of my grandchildren, and now he’s standing here with a videotape recording me,” she explains to the dispatcher. “Could you please send the police?”

Soon, she’s trying to stir up sympathy by noting that “the poor owner doesn’t know what to do. The owner didn’t know if he could kick him out.” In response, the man filming quickly fires back that “the owner is free to kick me out. No one has asked me to leave.”

Portions of the woman’s conversation are difficult to make out over the distance and through her intermittent use of a face mask. She notes to another customer that she doesn’t want to reveal her car to the camera, presumably to protect her identity. When police aren’t immediately receptive to her demands, the woman starts to lose her patience. “I’d like to leave, I have two grandchildren, I have an aggressive man standing here photographing me,” she says.

“You do understand that they’re going to come to you and you’re going to be in trouble,” she says to the cameraman. Unfortunately for her, she’s wrong. The video can’t catch the dispatcher as they deliver the bad news, but the woman’s reaction is enough.

“What do you mean, so there’s no officer who can come right now,” she asks, seemingly perplexed that an officer might not have time for her non-issue. She follows this baffled question with a rant. “OK so you have a man who’s aggressing me, it is an emergency,” she says. “There is a man aggressing me inside a store, and you’re telling me there’s no police? I can call the press. Is that what you want me to do?”

Then, in true Karen style, she asks to speak to the manager.

The inaudible response to her question sets the woman off. “OK so you tell me, ma’am, what I’m supposed to do with this gentleman standing here, taking a video of me, and you can’t free up an officer to get up here to confiscate his phone.” Her voice is raised by the end, and reaches a shout as she proclaims that she can’t return to her car because “I don’t want him taking a picture of my car!”

The woman appears to be denied at every turn. Ultimately, she decides to hang up and call 411, which typically serves as a directory number.

In the last few minutes of the video, the woman repeatedly demands that she get her way, and ultimately—to some degree—succeeding. The store owner agrees to escort the man filming out the back exit. The cameraman repeatedly apologizes for his role in the confrontation on his way out.