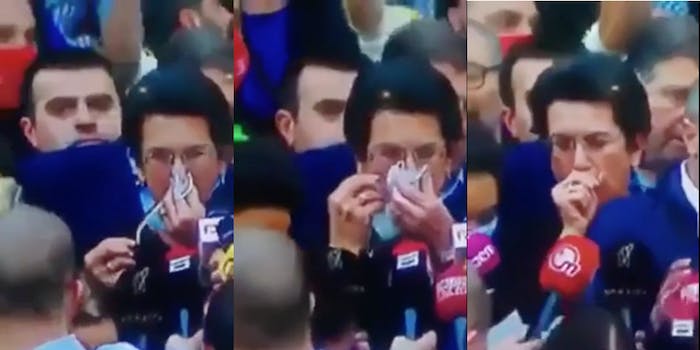 This might be the worst possible way to use a mask.

A new Reddit video is circulating with a Karen blowing her nose with a mask and then coughing into her fist—all taking place in a crowd where reporters with microphones are circulating.

These violations of mask wearing protocol were cheekily presented on Reddit’s r/Public Freakout subreddit, with the headline, “How to use a mask correctly.”

According to Reddit commenters, the video appears to be from Tbilisi, the capital of Georgia, which is one of the border nations between Europe and Asia. The nation had until recently done a good job containing coronavirus compared to its European neighbors, but now is experiencing a sharp rise in cases.

The seven-second video was posted by a Ukrainian user, From_The_Sun. It received over 37,000 upvotes within 12 hours of its posting Monday, focuses on a woman in a crowd of people. The video begins with her clutching the mask in both hands, and bringing it to her face. She then appears to blow her nose into the mask.

The video finishes with her bringing the mask back down with her left hand, bringing her right hand to her mouth, and coughing into her fist.

Though she wasn’t specifically identified, several Reddit users asserted that she was a political figure in Georgia.

Most of those commenting expressed an existential dread in her behavior—which would be unwelcome no matter where in the world she’d be.

“As soon as I feel my mask reaching down towards the very edge of my nose, I instinctively pull it back up (while not touching the front of course,” one Redditor commented. “How anyone even manages to unsafely touch their mask or keep it at an unsafe position on their face at any time really questions my view on people’s IQ at this point.”

Another remarked, “I saw a lady who took her masks off to cough the other day. Said she didn’t want to catch her own germs.” That was met with the glib reply, “We have collectively failed as a species. It was a good run fella, but we’re done for.”