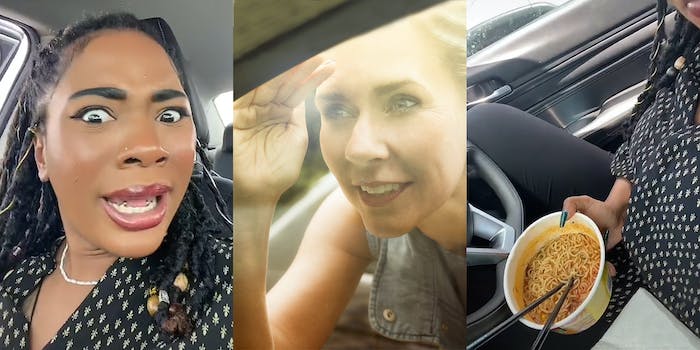 ‘Karens feeling threatened by a bowl a ramen’: TikToker claims ‘Karen’ berated her for eating in her car while on break at work

'Do you really think that I would be sitting out here in 85-degree weather, eating a f*cking bowl of ramen if I didn’t work here?'

A woman on TikTok claims a ‘Karen’ berated her for eating in her car while on a break at work.

“So, I usually eat in my car because I want to be alone and not be around people at my job,” the TikToker, Kellin (@callmekellin) shares.

She notes that it has nothing to do with her job or co-workers, she just enjoys eating alone in her car. Kellin says she understands how it might look weird to people—but they usually don’t say anything.

“And, like, I get it. It’s a little bit weird,” Kellin says. “Sometimes, people stare at me, but they mind their own damn business for the most part. Until today, when a Karen decided she was going to walk up and knock on my window and tell me that basically said I can’t eat here.”

When Kellin asked why the woman wouldn’t allow her to eat there, she said it was for a community safety reason, the TikToker says.

“She said her husband owns a house or a villa somewhere near here, and she doesn’t feel safe knowing that people are eating in their car,” Kellin continues. “Then she said, ‘You obviously don’t work here because you wouldn’t know.’”

Kellin then asks why she would be eating in her car if she didn’t work there.

“Lady, do you really think that I would be sitting out here in 85-degree weather, eating a fucking bowl of ramen if I didn’t work here? I would be in my goddamn house,” Kellin says in the video. “I would be at my house, sleeping.”

At that point, Kellin claims she rolled up her window and told the woman to stop talking to her. “Thankfully, she walked away,” she concludes.

Her video has received over 60,000 views since it was shared June 22. Many viewers related to Kellin, noting that they also eat in their cars on their work breaks.

“Bruh my parking lot is secluded thankfully so I did this religiously when I started my job. I feel you,” one user said.

“I know a number of my colleagues who go to their car, and eat. It’s not as weird as one would think,” another person wrote.

“Worked at a few banks and I ALWAYS ate in my car. Even when it rained cause I need a break,” a third stated.

“Bruh my parking lot is secluded thankfully so I did this religiously when I started my job. I feel you,” a fourth wrote.

Others were outraged on Kellin’s behalf.

“Karens feeling threatened by a bowl a ramen being ate outside now… lord,” one person commented.

“I can’t imagine having the audacity of merging into somebody’s lane for something as innocuous as EATING! FFS,” another one said.