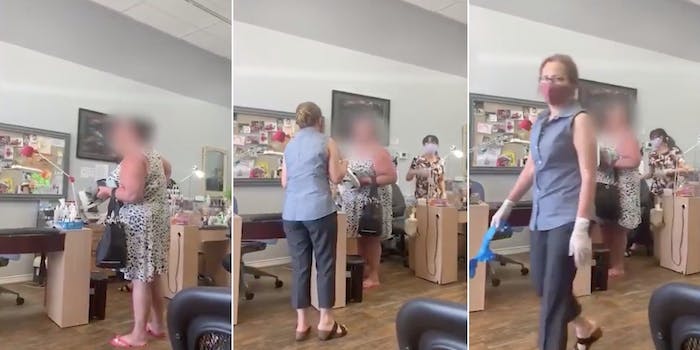 'I'm standing up for my civil rights that you’re too dumba** to figure out.'

A video uploaded to Reddit shows a woman proudly carrying the mantle for Karens everywhere by throwing an expletive-laden tantrum in a Phoenix nail salon. All over the need to wear a mask.

The video, posted on r/PublicFreakout, opens with Karen lecturing another person—presumably an employee—about her refusal to wear a mask in a hostile tone of voice.

“Shut the fuck and maybe you’ll learn a lesson,” Karen says. “Don’t start with me. Pick another victim to start with. I’m not her.”

“You’re not a victim?” another woman asks Karen.

“Exactly fucking right, so shut the fuck up,” Karen says, to which her confronter replies, “You’re a sad, sad woman.”

“I’m not sad,” Karen insists. “I’m standing up for my civil rights that you’re too dumbass to figure out.”

Another employee threatens to call the police if Karen doesn’t lower her voice—which, unsurprisingly, prompts her to yell even more loudly. The video was recorded at Du Nails salon last week, according to Fox 5.

“I will not lower my voice. I will not!” Karen says. “Call them, and maybe they’ll arrest me for yelling.”

“They’ll arrest you for breaking the law, you dumb idiot,” the other woman chimes in.

“It’s not a law, you dumbass,” Karen replies. “Get a fucking clue. It’s not a law. You’re just bending to it.”

The woman arguing with Karen tells her again that she is “so sad,” to which Karen once more reacts poorly.

“You wish I’m sad,” Karen says. “You’re the one sad, cowering and scared in your life. Have fun. Go wear your mask. Bye-bye!”