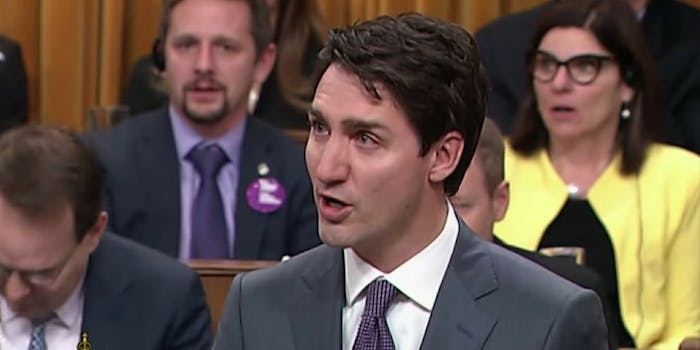 From the 1950s to the 1990s, Canada discriminated against LGBTQ government workers, and convicted thousands of Canadians for having sex with someone of the same gender. Speaking in the House of Commons on Tuesday, Prime Minister Justin Trudeau delivered a tearful apology for his country’s historic “state-sponsored, systematic oppression and rejection” of queer Canadians.

“You are professionals. You are patriots. And above all, you are innocent. And for all your suffering, you deserve justice, and you deserve peace,” Trudeau said.

According to CBC News, Trudeau expressed shame, sorrow, and regret to the government workers, military service members, and criminalized public for the discrimination and subsequent pain they faced at the hands of Canada’s hateful, violent legislation.

In his speech, Trudeau addressed the systemic firing and convictions of Canadians who were, or suspected to be, a part of the LGBTQ community.

“Our laws made private and consensual sex between same-sex partners a criminal offense, leading to the unjust arrest, conviction, and imprisonment of Canadians,” he said. “This criminalization would have lasting impacts for things like employment, volunteering, and travel…Those who admitted they were gay were fired, discharged, or intimidated into resignation. They lost dignity, lost careers, and had their dreams and indeed, their lives, shattered.”

As part of the government’s apology, Canada has set aside $145 million, $110 million of that covering reparations for LGBTQ government workers or military who lost their careers to discrimination, and $15 million dedicated to historical reconciliation, education, and memorialization efforts. Canada’s government and military will also create support programs to promote networking and positivity for LGBTQ service members.

However, overturning such convictions will be difficult in practice. Michael Motala, one of the authors of the report that encouraged the government to apologize, said the legislation puts the onus on the victims and their families to prove they were discriminated against, which could be further complicated by the trauma of the ordeal, if the family doesn’t know their family member was subjected to the “queer purge.”