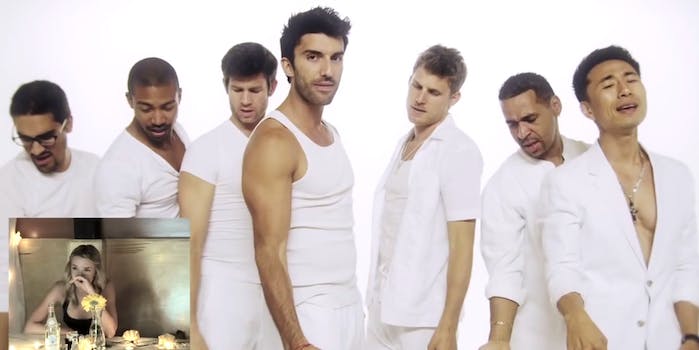 Justin is late to the restaurant, but he suddenly appears on the TV. What happens next will make you cry.

We already know that actor and director Justin Baldoni can tell a story that will move us. He’s the director who partnered with SoulPancake to create My Last Days, a documentary on the life of YouTube musician Zach Sobiech released shortly before Sobiech died in May.

But when it comes to telling another important story—his own—he puts in just as much care.

On April 13, Baldoni took his girlfriend Emily Foxler out to the restaurant where they had their first date and secretly filmed her as she watched the showstopping wedding proposal video he had put together.

With a variety of creative proposals already online, we can figure out where this is leading, but Foxler sits and watches as Baldoni tries a variety of elaborate approaches to show his love such as spoofing music videos and a flash mob, but every time you think he’s got it nailed down, he tops himself.

It’s epic enough to melt even the biggest cynic’s heart, but if you’re pressed for time, you can catch her reaction around 22 minutes in.

Baldoni has been expressing love through video for years, and he originally made the video—full of inside jokes and tailored just for Foxler—for family and friends, who helped him film it over the course of 10 days and encouraged him to release it months later.

“The people who watched the video with us told us how much it meant to them to see our love and see all these people come together and all this happiness, so we just wanted to see if we could make people smile,” Baldoni told the Daily Dot.

The most epic proposal I’ve ever heard of. And I feel so blessed it was my very own. @justinbaldoni #theproposal https://t.co/N3zGBWp9RK

Future fiancés have some very big shoes to fill.