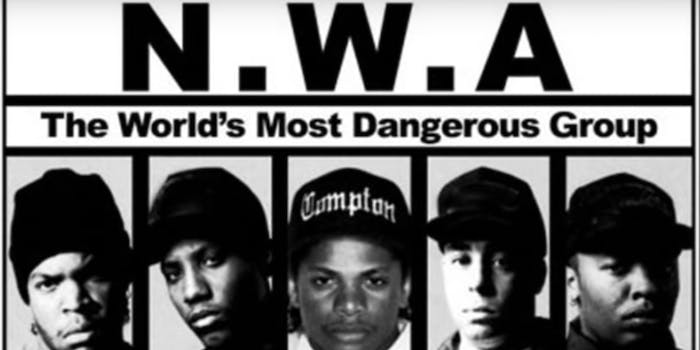 He was found 'not guilty' in less than 10 minutes.

Earlier this year, a Michigan driver was ticketed for playing “Fuck Tha Police” in front of a police officer. A jury recently acquitted him in less than 10 minutes, the Root reported Wednesday.

James Webb, who is white, said he began playing the popular N.W.A. song when he pulled into an Pontiac gas station and saw a Black man pulled over by a police officer.

“I went over there and played that song loud. I meant to do it to the officer but as a form of protest,” Webb told Fox 2 Detroit.  When Webb exited the gas station, the deputy officer took his license and issued a noise complaint ticket. The officer also noted in the police report that the music was “vulgar and offensive,” according to Fox 2.

Dejuante Franklin, whom the deputy pulled over, said that the officer was angry about the song specifically. “The cop was talking to me, handing me my ticket, and was like ‘is he playing that for me?’ I was like ‘I don’t know him, you ask him that question’,” Franklin said. “He was like ‘I’m sick of this…I’m going over there now’.”

Webb decided to risk a more expensive ticket and up to 93 days in jail to challenge the ticket in court. He was defended in court by Nicholas Somberg, a Michigan attorney who heard about Webb’s case on Facebook.

“I told him ‘I’ll represent you for free,'” Somberg told Michigan Live. “I think the ticket is bull.”

The offended officer told the court that the music was loud and offensive, specifically pointing out the use of the work “fuck.” Somberg defended Webb in court by noting that the officer had used the same word when he pulled Franklin over.

“The police officer’s reasoning was that he said this music was vulgar,” Somberg said, according to the Root. “But we had on the video that the first man the officer had pulled over; the officer is dropping F-bombs with him. So why is it OK for this man to hear the F-word but not other people?”

The jury found Webb not guilty after a nine-minute deliberation. Following the ruling, Somberg went to Facebook to thank all of Webb’s supporters who “came out to support us and stand for the 1st amendment.”

Here is the segment from last night after our epic *NOT GUILTY* victory in Pontiac. First I want to thank my mentor…