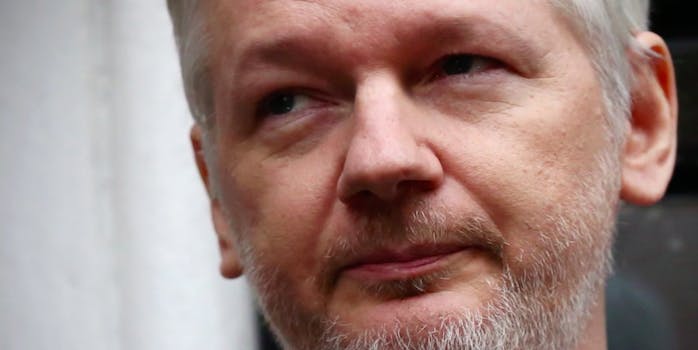 Swedish authorities on Monday announced they’re reopening their investigation into one of the two sexual assault cases against Wikileaks founder Julian Assange, according to the New York Times.

Assange, who was arrested after being evicted from the Ecuadorian embassy in London a little over a month ago, is also fighting extradition to the U.S., and has been sentenced to 50 weeks in jail in the U.K. for not complying with his bail terms.

Assange initially faced allegations of sexual molestation, coercion, and rape by two Swedish women in 2010. But the investigation was closed in 2017 because prosecutors did not see the point of fighting the case while he was holed up in an embassy in London, according to the Times. Assange had been hiding in the Ecuadorian embassy there since 2012 while escaping extradition to Sweden for the sexual assault investigations.

However, since his arrest last month, a lawyer for the two Swedish women has asked that their cases be reopened, reported the Times. While the statute of limitations had passed in one of the cases, the other case will now be pursed.

On Monday, citing that there’s still “probable cause to suspect,” Eva-Marie Persson, the deputy director of public prosecutions in Sweden, announced the reopening of the case. “Now that he has left Ecuador’s embassy, the conditions in the case have changed and… the conditions are in place once again to pursue the case,” Persson said, according to the BBC, adding that a European Arrest Warrant (EAW) would be issued against him.

Wikileaks has said this would be an opportunity for Assange “to clear his name,” while his lawyers claimed it’s “embarrassing for Sweden,” BBC reported. Assange has maintained his innocence in the sexual assault charges, claiming the sex was consensual.

This development likely complicates the U.S. already working to extradite Assange, after unsealing an indictment against him within hours of his arrest, as it leaves the case in murky waters—the U.K. now has to choose whether to extradite him to the U.S. or Sweden first.

He faces five years of prison in the U.S. for conspiracy over leaking highly sensitive government documents. Persson said given that Assange has already been arrested in the U.K., he will have to spend at least 25 weeks in jail before a transfer to Sweden is likely. She added that the Swedish case can be pursued simultaneously to the British one, and that they are hoping to interview Assange while he’s in prison in the U.K.

According to the Times, when there are more than one extradition requests for a person, it ultimately falls on the seriousness of the crimes to decide which takes priority, as well as other factors like the date of the extradition request filing and the location of the crime. In this case, the rape allegations would be considered much more serious, a British extradition lawyer told the publication. However, a legal affairs correspondent for the BBC had a differing opinion, saying that given Sweden’s extradition request was withdrawn in the sexual assault case, the U.S. extradition might rank higher.