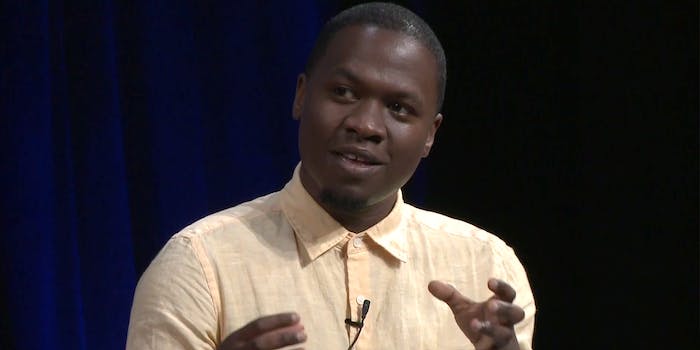 Threats were allegedly made an attempt to harass and intimidate an ex-lover.

The FBI arrested Thompson in St. Louis, Missouri, on March 3. A statement released by the United States Attorney’s Office reveals that Thompson has been accused of eight threats to Jewish centers, including a cyberstalking complaint with bomb threats falsely communicated in a female victim’s name. Thompson is accused enacting bomb threats in order to intimidate the anonymous victim, an ex-lover.

“Thompson’s alleged pattern of harassment not only involved the defamation of his female victim, but his threats intimidated an entire community,” FBI Assistant Director-in-Charge William F. Sweeney Jr. said in a statement. Thompson’s alleged threats occurred between Jan. 28 and Feb. 22, officials say. Targets include Jewish community centers and schools across New York and Michigan, as well as in San Diego and Dallas.

This isn’t the first time that Thompson has found himself in the national spotlight. He previously broke national headlines after he was fired from the Intercept for fabricating quotes and sources for a variety of stories.

In one piece, Thompson invented a cousin for Dylann Roof, the man convicted of murdering nine black parishioners at a historic Charleston, South Carolina church. Called “Scott Roof,” Thompson came up with a quote claiming that Dylann Roof “kind of went over the edge when a girl he liked starting dating a black guy two years back.”

After Thompson’s arrest, Intercept Editor-in-Chief Betsy Reed clarified the publication’s relationship with Thompson as an ex-employee.

“We were horrified to learn this morning that Juan Thompson, a former employee of the Intercept, has been arrested in connection with bomb threats against the ADL and multiple Jewish Community Centers in additional to cyberstalking,” Reed wrote in an official statement. “We have no information about the charges against Thompson other than what is included in the criminal complaint.”

A wave of bomb threats and hate crimes have hit Jewish community centers, or JCCs, in the past few months. On Monday, over a dozen JCCs and schools across the U.S. were evacuated due to bomb threats, making it the fifth wave of bomb threats to hit JCCs in 2017. In both January and February, bomb threats across the country were called in against Jewish entities. And at least 100 headstones were vandalized in a Jewish cemetery in Philadelphia as well, shortly after similar vandalization in St. Louis.

President Donald Trump previously suggested that the recent wave of anti-Semitic attacks may be an attempt “to make people—or to make others—look bad,” according to Pennsylvania Attorney General Josh Shapiro. The Anti-Defamation League quickly asked President Trump to clarify his remarks. Later the same day, at the president’s address before Congress, Trump denounced threats against JCCs and other acts of violent hate.

“Recent threats targeting Jewish community centers and vandalism of Jewish cemeteries, as well as last week’s shooting in Kansas City, remind us that while we may be a Nation divided on policies, we are a country that stands united in condemning hate and evil in all its forms,” Trump said.