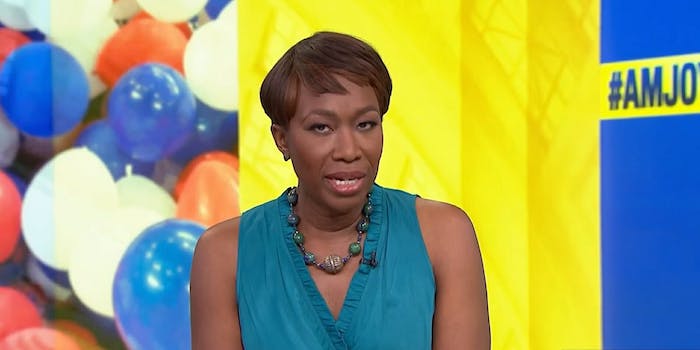 The journalist is facing serious consequences over an alleged series of anti-LGBTQ sentiments.

MSNBC host Joy Reid is under fire this week after a Twitter user says they unearthed another set of homophobic blog posts in which the journalist rejects gay marriage, claims LGBTQ groups exploit teens, and calls gay sex “gross.”

The controversy began in December after Twitter user Jamie_Maz first found “a dozen homophobic posts” that attempted to out former Republican Florida Gov. Charlie Crist as gay from Reid’s defunct blog The Reid Report. The posts, which were found through the Internet Wayback Machine, show Reid calling Crist “Miss Charlie” and making derogatory comments about “gay politicians.” Reid apologized for the blog posts in an official statement late last year.

Reid’s apology was received well at the time. But earlier this month, Jamie_Maz shared more posts allegedly from The Reid Report, this time “far worse than 1st reported.” These show Reid opposed gay marriage and randomly accused politicians and media figures, some of which are actually in the closet, of being gay. One post even featured a strangely anti-Semitic remark claiming most neoconservatives “happen to be Jewish.”

“Most straight people cringe at the sight of two men kissing,” Reid allegedly wrote in the late 2000s. “Part of the intrinsic nature of ‘straightness’ is that the idea of homosexual sex is… well… gross… even if you think that gay people are perfectly lovely individuals.”

Reid’s old tweets further echo the alleged blog posts’ tone. In one tweet from 2010, Reid jokingly called Ann Coulter a “shim,” a derogatory term aimed at transgender women. Another features a Gawker headline with the word “tranny” in the title.

Reid has since denied writing the alleged posts on The Reid Report, claiming in an official statement to Mediaite that “an unknown, external party accessed and manipulated material” from the blog as “part of an effort to taint my character with false information.”

But many remain skeptical. Renowned LGBTQ organization PFLAG released a statement on Tuesday announcing that it would rescind its Straight for Equality in Media award to Reid, pointing out that PFLAG accepted her apology in December but feels her handle on the current controversy warrants concern.

“We appreciated how she stepped up, took ownership, apologized for [her Crist posts], and did better—this is the behavior and approach we ask of any ally,” PFLAG National president Jean Hodges said in a press release. “However, in light of new information, and the ongoing investigation of that information, we must at this time rescind our award to Ms. Reid.”

Meanwhile, the Daily Beast’s executive editor Noah Shachtman told his staff on Wednesday that the website decided to “hit pause” on Reid’s columns while two reporters are “digging in and reporting on the accusations,” an email obtained from CNN’s Oliver Darcy reveals. One reporter is investigating whether Reid was actually hacked, and another is looking into Reid’s longer history with her “tone she took offline at the time.”

“Obviously, this is a difficult situation,” Shachtman wrote. “We’ve all said and done things in our lives that we wish we hadn’t done. We deserve the room to grow beyond our past. But these allegations are serious enough that they deserve a full examination.”

The internet, meanwhile, remains conflicted on Reid. Some feel her comments are deeply homophobic, transphobic, and bigoted. They doubt the hacking claims and think she owes a much more sincere apology.

I don't know who's advising you on PR, Joy, but from a LGBTQ community member, it would be better to apologize, admit you had homophobic/transphobic views once upon a time, and that (hopefully) those views have changed, instead of trying to blame everything on hackers. Seriously.

Let's be clear. Joy Reid did write all of these hideous blog posts, not only were they homophobic, they cheered on Trump, fat shamed Rosie O'Donnell, and were insanely mean

If you don't believe experts who know she's lying, her constant misspelling of 'feud' is a dead give away pic.twitter.com/MsjvaZB8Ig

Others, jounalists included, are taking her side.

My noble friend of pure heart, @JoyAnnReid is an extremely important and invaluable voice, and I strongly support her now and always will.

10) Again, I cannot say with certainty none of these posts she's disavowed appeared on her blog way back when. I can just say: I've been reading her for 17 years. And I don't believe they did. Thanks for reading.

There's a goddamn raving monster in the White House and on the left we're arguing over some stuff Joy Reid might have blogged over a decade ago? Get your fuckin' priorities right.

Even WikiLeaks is getting involved.

Substantial thread looking at the Joy Reid evidence. Reid falsely claimed the posts were made by hackers. Note that while Reid has censored the HTTP archive at the Internet Archive the HTTPS archive still works
1) https://t.co/MmBqIJFiyO
2) https://t.co/r1jLAB4DrX https://t.co/YpOK8sNUUJ

The problem (for WikiLeaks) isn't what she said in the past. The problem is the strong suspicion that a prominent presenter is fabricating stories now as part of a cover up.

It’s unclear what will happen next to Reid, but her days as an MSNBC host could be running out. i24News anchor and managing editor David Shuster, who previously anchored for MSNBC, claims NBC and MSNBC are outright considering firing Reid for “alleged lies over her inflammatory blog history.” If that’s the case, then AM Joy may soon be a thing of the past.