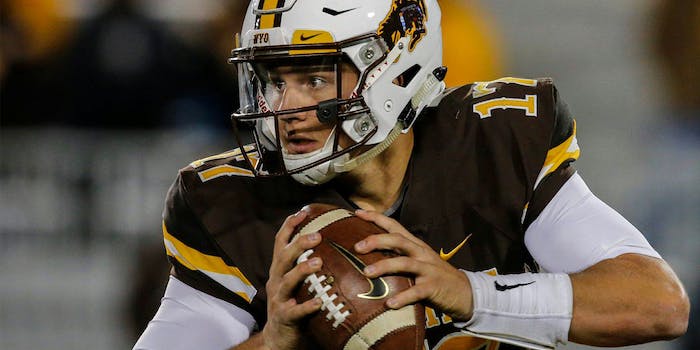 What can we learn from the old, hateful tweets of a young man?

For months, NFL fans have argued over which of the top-five quarterback prospects should be picked first in Thursday’s draft. Josh Allen, the Wyoming signal-caller with the laser arm, did his cause no favors when he forgot to delete old, racist tweets that came to light this week.

Yahoo Sports late Wednesday combed through the QB’s timeline and found tweets between 2012 and 2013, when Allen was a high school athlete, full of the N-word. Since Yahoo’s report, they’ve been deleted.

i dont think you n***s want a troubled son

He apologized and said he was young and dumb a few hours later when speaking to ESPN.

Allen grew up on a large farm in Firebaugh, California, and ask anyone who hung out with white athletes from southern or rural high schools, and they’ll admit that the slurs come early and often. It’s racism that’s normalized in slang.

In sports, it can be even more insidious, and often these white teens seem to see Black athletes as fundamental adversaries—and besting them as a measure of strength. (In Texas, I’ve heard white high school athletes use the N-word an awful lot. Once, my friend ran past me for a touchdown while playing in the street and then bragged that he had “Black speed.” We were in the seventh grade and it was the mid-’90s.)

Another Allen tweet, “(uhh) stay schemin…’ N****s Trying To Get At Me.’ doe,” is from a Drake song. When you think about how many white kids carelessly throw around the N-word as a result of consuming hip-hop, one can make the case that while it’s dumb, it’s also not actively hateful. Allen’s tweets seem to show a young man who thinks about race and color as a way to marginalize the competition. Consider another Allen tweet from June 2011: “I hate LeBron!!!!!”

In June 2011, LeBron James was the best basketball player in the world and playing for the flashy, outspoken Miami Heat (this is a team that would a year later post an Instagram in hoodies as a tribute to Trayvon Martin). Miami was playing the Dallas Mavericks and their white superstar Dirk Nowitzki in the NBA Finals. On June 7, when Allen tweeted disdain for James, the Mavs came back to tie the series at 2-2. Why am I not surprised Allen was rooting for Dallas?

Allen told ESPN Thursday that some of the tweets might have been composed by friends he says tweeted via his phone as a joke. Indeed, it seems unlikely that he’d write and then tweet something like “I looove penis,” which his account apparently did in 2012.

The Cleveland Browns pick first on Thursday, and as of Thursday afternoon, the franchise is still considering Allen. It’s unlikely this information drops his stock out of the first round. Hey, he was just a 14- or 15-year-old kid, many football fans have argued on social media. But as film producer Tariq Nasheed noted on Twitter, there are 15-year-olds in the United States getting life sentences for non-violent offenses—and there is no excuse for racism.