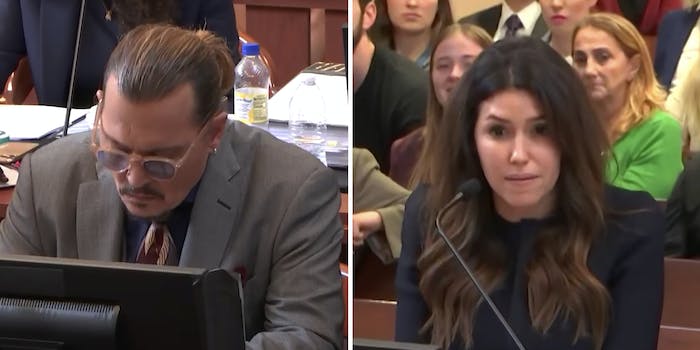 'People need to stop treating this court case like a film.'

The rumors were fueled by a now-viral clip of Vasquez exiting the Fairfax County Circuit Courthouse Tuesday afternoon when a TMZ reporter asked her, “The people want to know, are you dating Johnny Depp? It’s all over the internet. Can you set the record straight, yes or no?”

Vasquez laughed and walked away without answering the question, leaving some fans to speculate whether the pair are dating or not. Several viral TikToks of compiled clips from the trial show subtle actions that some say point to a romantic relationship between Depp and Vasquez, including Depp pulling out a chair for Vasquez, the pair hugging when Depp enters the courtroom, and Vasquez holding Depp’s arm when she whispers something to him during the trial.

“If they end up together, they would be power couple goals,” one commenter wrote.

“Hmmm I’m scared she’s married and we’re going to ship it for nothing,” another said.

“I agree. There’s a connection,” a third added.

Some TikTok edits “shipping” Depp and Vasquez have reached up to 713,000 views. The Australian gift delivery company Dessert Boxes created a petition for Depp and Vasquez to date on Change.org, which is posted to the brand’s TikTok page. At the time of publishing, the link was no longer active.

While “shipping” couples is a common fandom practice of creating a romantic narrative between two fictional characters with perceived chemistry, some users feel that shipping Depp and Vasquez is out of line, encouraging fans to stop fueling dating rumors.

“People need to stop treating this court case like a film,” one commenter wrote. “She’s a professional doing her job.”

“This is another reason why it shouldn’t have been publicized,” user @froggyfleurr said. “I think they’re just being friendly, and people are taking it out of context.”

“Plzzzz people, try to understand sure they are cute together, but this can very much affect the case,” a third added.

According to TMZ, a source close to Vasquez said she is already in a committed relationship, and her relationship with Depp is purely professional.

The Daily Dot reached out to Vasquez and Slate PR, the public relations agency representing Johnny Depp, via email.