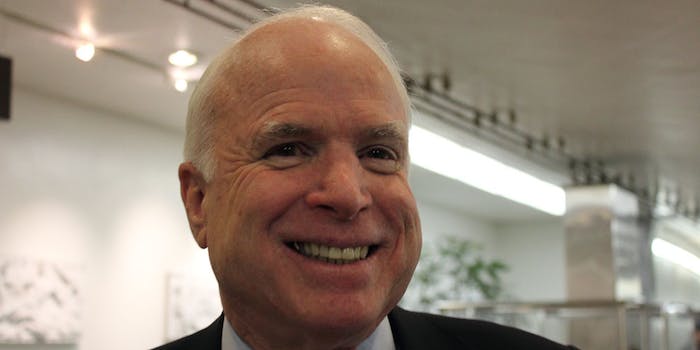 The Arizona senator isn't one for mincing words.

“I’ve been a member of this committee for many years,” the straight-talking Arizona senator and committee chair groused as Capitol Police ushered out the chanting activists, “and I’ve never seen anything as disgraceful, and outrageous, and despicable, as the last demonstration that just took place.”

A seething McCain then informed one vocal straggler, “You’re gonna have to shut up, or I’m gonna have you arrested. Get out of here, you low-life scum.”

Kissinger, now a frail 91 years old, appeared before the committee with Madeleine Albright and George P. Shultz, two fellow former secretaries of state. The anti-war demonstration didn’t seem to faze him, but then again, when your career spawns entire books about how you ought to be prosecuted for crimes against humanity, this probably feels like a drop in the bucket.

As for McCain’s indignation, well, this is the man who once called his own wife a “trollop” and a “cunt.” We’d say Code Pink got off easy.