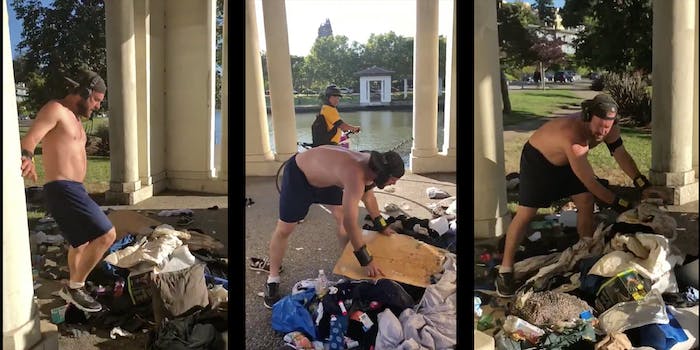 A jogger in Oakland destroyed a homeless person’s encampment Friday evening and threw it into Lake Merritt, according to a video filmed by local resident JJ Harris.

The video posted to Facebook group Lake Neighbors shows the man—who’s now been dubbed as #JoggerJoe—gathering up the belongings of a homeless man identified as Jarew and taking them to a trash can near the lake amid pleas of onlookers for him to stop.

“Sir, I think you should stop,” said one of the onlookers.

“You just threw it in the lake,” said another. The jogger argued with the bystanders and called his actions an “accident.”

Yesterday in Oakland jogger found throwing a peaceful homeless man’s possessions in the Lake. . What has this town come to?! #JoggerJoe #BbqBecky #Oakland pic.twitter.com/QAldK6VIRy

“There was a very angry, of course, white guy who was just here,” resident Harris Gallup told the SF Gate. “And he just fucking demolished this homeless guys camp.” Later, Gallup said that the man who lived there always kept his space “tidy” and out of the path of foot traffic.

Gallup described the jogger’s actions as morally reprehensible and cruel.

“This whole incident is a pretty succinct manifestation of so many of Oakland’s current issues,” she said. “Racism, gentrification, white privilege, male privilege, hatred towards poor and homeless people, lack of resources due to funds not being allocated properly, lack of consequences for unjustifiably bullying of homeless people, and sheer apathy towards their predicaments.”

Jarew is one of thousands of local Oakland residents who find themselves homeless amid a housing affordability crisis. In the past two years, the number of Alameda County’s homeless has shot up 39 percent—a whopping 5,629 people—according to East Bay Times in 2017.

Folks on Twitter have identified #JoggerJoe to be a man named Henry Sintay, according to Oakland News Now. He was also identified by community organizer Matt Nelson, who says he confronted Sintay about his actions and was then allegedly assaulted by Sintay once Sintay realized that Nelson was filming their conversation with his phone.

Other news sources have not yet confirmed #JoggerJoe’s identity. As Gallup pointed out, for many locals, the man’s actions are symbolic of white Oakland residents’ overall apathy for Black homeless people.

That video of the jogger, a.k.a. #JoggerJoe, just proves more that these gentrifiers don’t care about the people in Oakland who were here before they decided to move here and wreck shit even more. If you’re gonna move here respect the people who were here from the jump. PERIOD

Thank you JJ for the video. #JoggerJoe is also every cop and Gov employee who sweeps houseless. Like it or not the constitution says you have the right to peaceful assembly. Cities only sweep vulnerable people. Time to #JoinThem and #StopTheSweeps

I just want people to be as horrified by the fact that millions of people don’t have homes in the wealthiest nation in the world as they are by #JoggerJoe. Both. Not one or the other. BOTH. That’s real human decency.

Thankfully for Jarew, the community has come together to raise funds for him and offer him support. So far, a GoFundMe set up by Kenzie Smith has raised over $1,300 for Jarew.