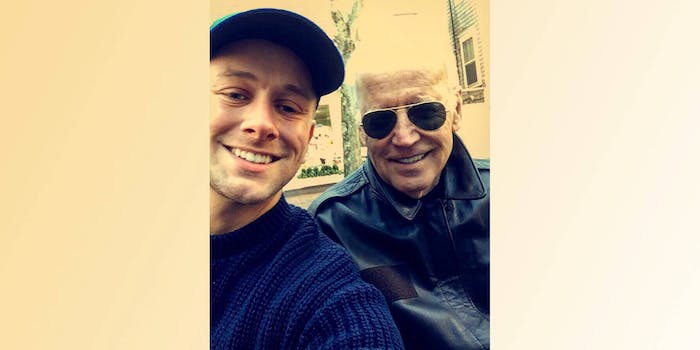 Redditor stumbles on Joe Biden reading a newspaper with his dog

Joe Biden is having a pretty chill Thanksgiving week. He’s made it back to Nantucket, Massachusetts, where’s he’s celebrated Turkey Day for some four decades. And it looks like he’s made a new friend on the island, too.

Redditor dustinharm encountered the renegade VP on Wednesday morning. Biden was sitting on a sidewalk bench reading the paper with his German Shepherd, surrounded by Secret Service agents who were close but not too close. “They follow him but give him enough space to go about his normal routine,” dustinharm explained on r/pics.

Dustinharm was on his way back from grabbing coffee when he saw Biden, who’s every bit as affable and approachable as you’d think. Turns out the two bros have a whole lot in common, too. Not only are they in Nantucket for the holidays but they both live in D.C. Dustinharm’s hoping to hitch a ride on Air Force Two when it comes time for both of them to head home.