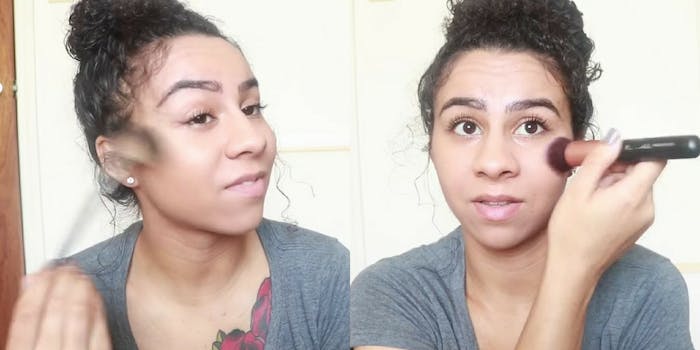 It's a makeup line with zero percent coverage.

In the wake of the Parkland, Florida, school shooting last Wednesday that left 17 students and teachers dead and 14 more injured, one YouTube makeup vlogger is showing the internet just how (in)effectual “thoughts and prayers” from politicians are.

In her “T & P Makeup Look,” JJ Smith, known as Sailor J on YouTube, drags the “thoughts and prayers makeup line,” telling viewers that the rich, indifferent people in Congress tweet about the product fairly often.

Panning to the ground, Smith shows viewers that she has the products laid out on the carpet, gesturing to invisible highlighters, contour kits, and eye makeup before pretending to dab her face with these nonexistent shades of “bulletproof black,” “the blood of our children,” and highlighter in “money”—all that the country cares about, Smith says.

“I really wish you would embrace the line, because nothing stops a bullet like thoughts and prayers,” Smith says.

Smith previously spoke to the Daily Dot in November regarding her tutorial “How to do Thanksgiving makeup that has nothing to do with the 566 federally recognized tribes,” in which she called out cultural appropriation of Native Americans.