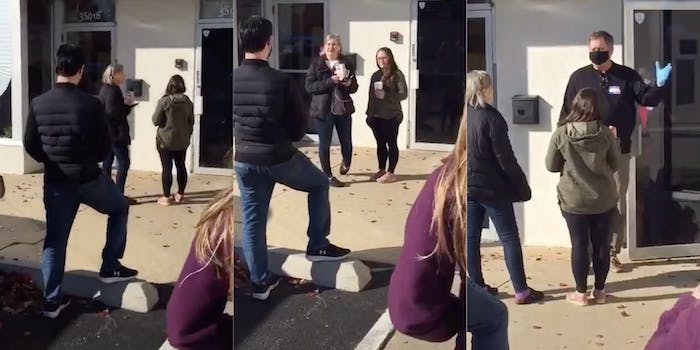 Voters get upset with Karens who hold up line, compare masks to Jim Crow laws

The video, posted by @_captainahmad, shows people trying to vote in DuPage County, Illinois. The two women are holding up the line as they are not allowed in the building without masks. “Why don’t you go to the back of the line, so all these people can vote?” one woman in line asks the women.

“Is this 1930’s Jim Crow laws?” one of the Karens asks, seemingly believing that being forced to wear a mask equates to anti-Black oppression.

The woman in line then asks the Karen to repeat herself, but she doesn’t. “Stop talking. I have every right to stand here, just like you do,” she says instead.

Another voter in line chimes in, prompting the women to begin arguing with him as well. A masked and medical-gloved man then comes out of the building to inform the women that the voting commission has demanded that they go to the back of the line. The women, however, continue to be combative. Another man in line, the filmer of the video, shouts at them: “Just put on a mask, and get it over with!”

The video was captioned, “Fucking Karens … we got in after I yelled at the end #Karen #voting#polls #vote.” The video has been liked over 55,000 times since being posted on Saturday, and it was even reposted to different social media platforms. “God white people want to be oppressed so bad,” one Twitter user wrote in response to seeing the video.

Many viewers couldn’t get over the woman’s incorrect, violent, and racist harkening of Jim Crow laws. As @Michelle_IC tweeted: “See the 1963 she’s referring to, Black’s couldn’t simply put a mask on and be treated equally. We were still denied #EqualRights #EqualService for an immutable trait aka our Black Skin.”