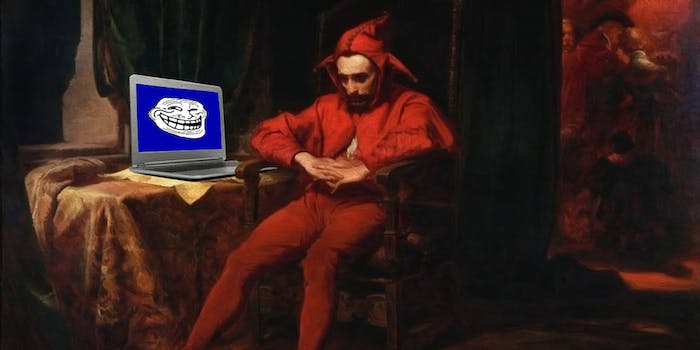 The Jester is back, and Homeland Security denies taking him down

Fans of The Jester, a “patriotic” cyber vigilante who seemingly lost his blog and website to a seizure by U.S. Department of Homeland Security Thursday, might be able to rest easy this weekend.

In the video, The Princess Bride’s Dread Pirate Roberts fights Inigo Montoya. In the closing seconds of the video, Roberts tells his enemy to “get used to disappointment.”

A few minutes after Jester’s tweet, a DHS spokesperson said Homeland Security’s Immigration and Customs Enforcement (ICE) division—the main investigative arm of DHS— had nothing to do with the takedown.

“We do not have any record of ICE activity seizing website [or] domain names in the last couple of weeks or regarding this website,” wrote ICE spokesman Justin Cole.

Whether the “seizure” was actually a joke by Jester or a hack by a rival remains to be seen. Jester himself has left us one Tweet suggesting that he was faking his own downfall — and not for the first time.

Justin Godfrey, a domain name investor, followed the case closely and wondered if Jester’s site had been hacked by a third party.

@Symmington @th3j35t3r hard to say, never seen a “seized” domain switch NS 4 times in 12 hours, could be registrar or someone in account

In May 2012, Jester faked his own retirement for the first time by deleting his Twitter account after another user said he knew Jester’s real identity. The patriotic hacker’s account went offline.

“This news exploded – and as some folks danced on my grave, I decided I had the rare opportunity just to observe without getting involved,” Jester wrote on his blog, according to Softpedia.  “I saw numerous people who had previously tried to befriend me or get into my head were now, safe in the knowledge I was effectively ‘dead’, totally berating me and my previous exploits, denouncing me and more.

The hacker’s identity was never revealed, and he made his return shortly after disappearing for the first time.

It doesn’t appear that Jester, who attended the high-profile Black Hat hacker convention without revealing his true identity, faked his own disappearance this time, but it’s still not clear who was behind the fake ICE seizure of his website.